Since the previous report, Llangollen Railway has gradually increased the extent of its operation, firstly to Glyndyfrdwy with effect from 13th August and then to Carrog with effect from 21st August. The latter date also marked the re-introduction of locomotive-hauled services with a steam service operated by GWR 2-8-0 no. 3802.

As a result, the class 108 worked the last of its so-called "Berwyn Shuttles" on 12th August and the Wickham class 109 then took over for the services to Glyndyfrdwy and later Carrog. The following pictures, which were taken on Saturday 21st August, show the Wickham shortly after arrival at Carrog... 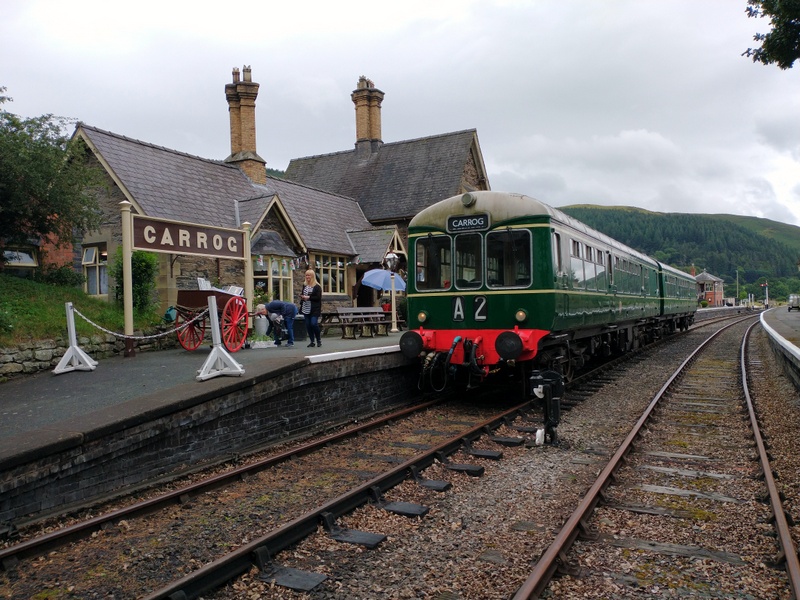 ... and being passed by the steam locomotive GWR no. 3802 at Glyndyfrdwy on its way back to Llangollen... 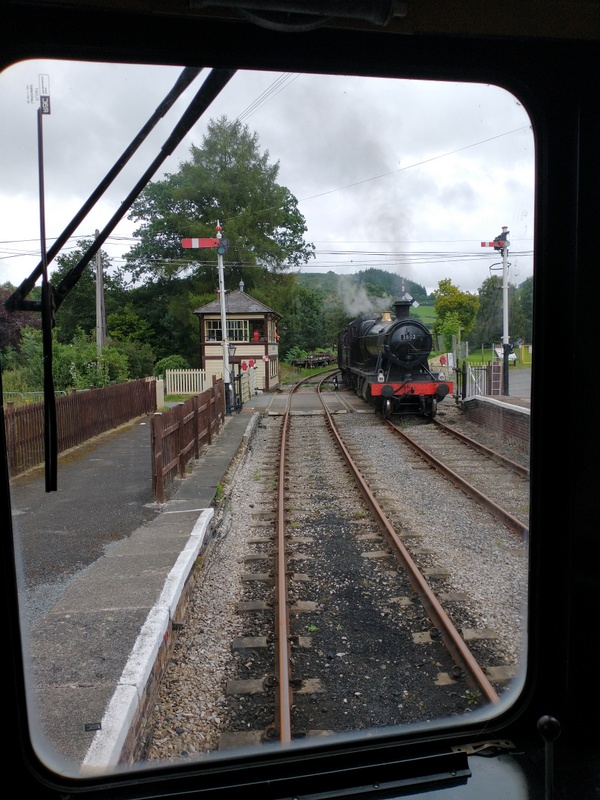 There was, unfortunately, one occasion when the Wickham finished up on the naughty step after its no. 2 engine shut down while climbing Berwyn Bank on the way to Glyndyfrdwy on 15th August and refused to work again even though no fault could be found. The Wickham needs all 300 of its 'horses' to climb the 1 in 80 gradient so instead it went back to Llangollen Goods Junction where it met the class 108 and the two of them completed the service to Glyndyfrdwy and back together. The following picture shows them at Pentrefelin Yard after the close of play ... 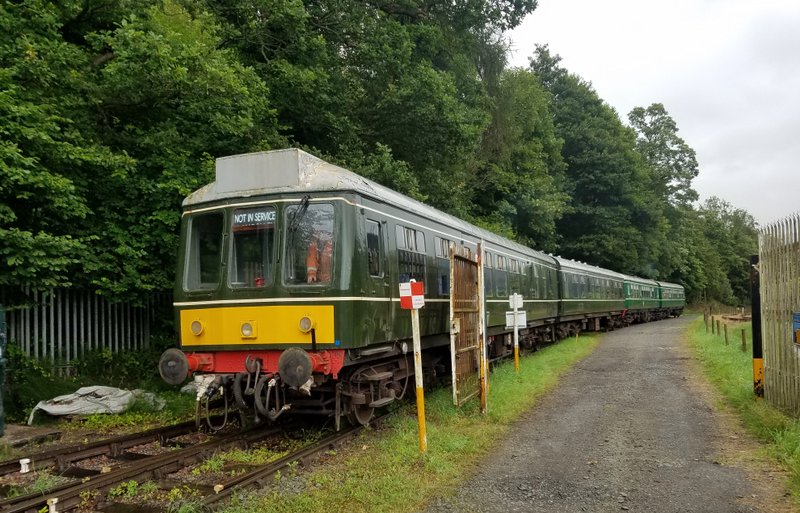 The fault was later traced to a problem with the coolant level switch or its associated wiring (see the class 109 section below for further detail).

There was at least one other occasion when classes 108 and 109 worked together as a 4-car unit due to the anticipated passenger numbers.


Information about the work that has been carried out on our vehicles at Llangollen and Butterley since the previous report can be found in the unit-specific sections below.


The following news item was submitted as an entry for 'Out and About' but failed to meet the stringent criteria by not mentioning anything about the movements of our DMUs or even about the movement of steel wheels on steel rails. It is, nevertheless, a very worthy news item!

Using the larger of the two vehicles in the following picture the chairman of the railcar group embarked on a long-distance shopping trip to the East Somerset Railway (Cranmore) where he was able to acquire some spare parts, some of which will come in useful for the restoration of the Gloucester DMU at Butterley. Please rest assured that he had negotiated the deal prior to the trip! :-) 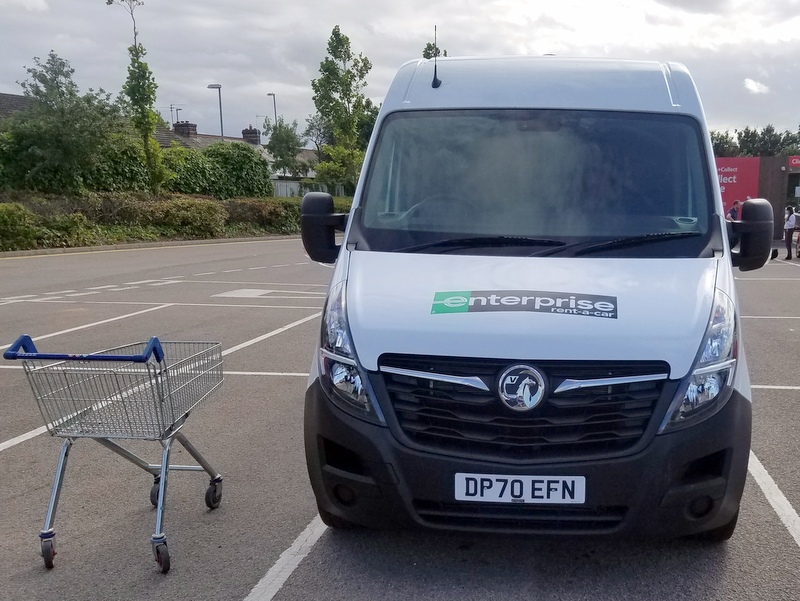 As well as managing the short-term maintenance and restoration of the fleet it is necessary to consider the future requirements and to acquire parts that may eventually be required as/when they become available.


Attention has focussed on getting this recently-marshalled hybrid unit ready for use.

Internally that has involved refitting the wooden framework behind 50454's guard's chair, producing panelling for it, re-sealing the window... 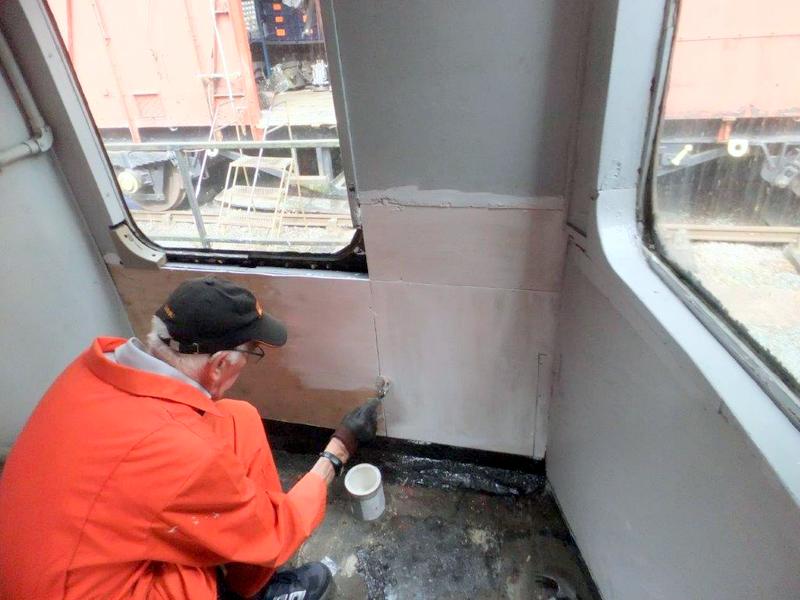 ... and generating the beading for the vestibule ceiling repair... 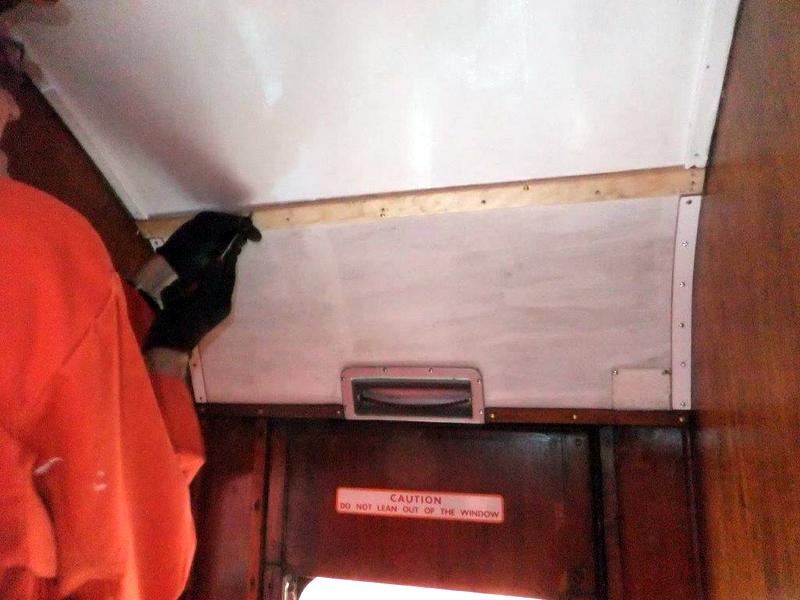 Externally, investigations were carried out to try to find out why the no. 1 exhauster (a belt-driven rotary device used to create the vacuum for the vacuum brake system) appeared to be particularly bad at its job.

To begin with the exhauster was replaced with a re-conditioned one... 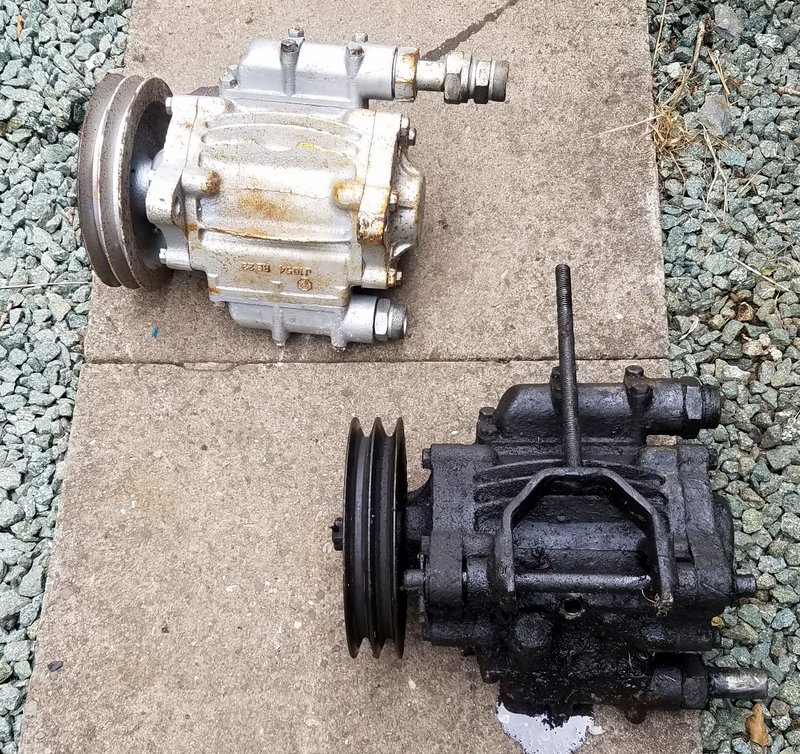 ... something that is no mean feat given that it lives right up "in the gods" under the vehicle floor... 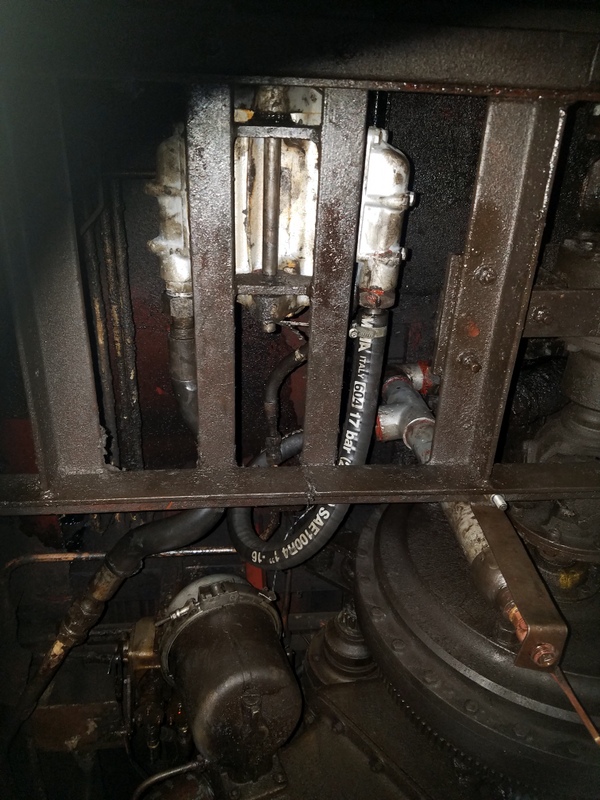 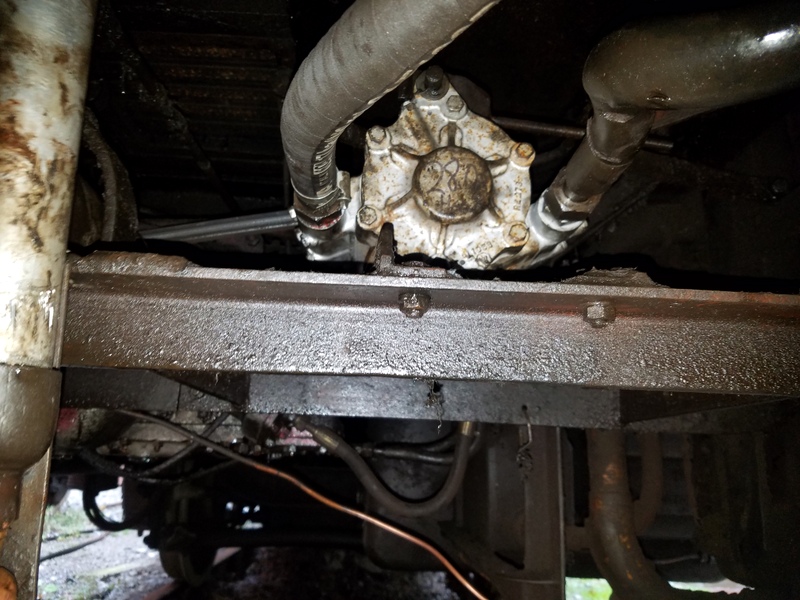 Unfortunately, though, that failed to cure the problem which will, therefore, live to fight another day.


As reported in out-and-about (above) the no. 2 engine shut down unexpectedly while operating the passenger service on 15th August and then refused to run. The symptoms suggested low water or oil pressure and yet no fault could be found. Back at the yard, it was discovered that the water level switch, which is designed to shut down the engine if the water level in the header tank drops below a threshold value, was shutting down the engine even though there was plenty of water. The switch was removed, cleaned, reinstalled and proved to work correctly. It was not clear why it failed in the first place but it may have had something to do with the connections in the adjacent terminal block. Fortunately it has worked reliably since then. 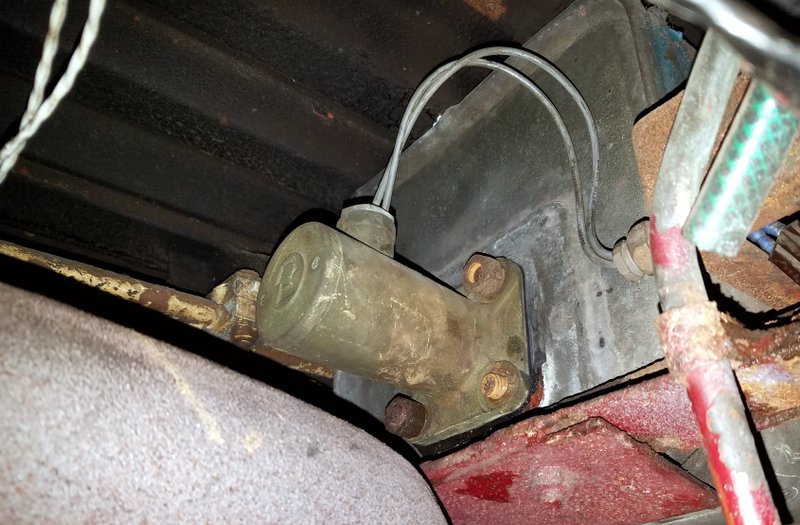 
The area around the secondman's door has been subjected to more welding/grinding and the hinges for it cleaned up and primed ready for fitting.

Thanks to Allen Chatwood, John Joyce and Martin Plumb for supplying the pictures.


On Tuesday 27th July the Class 109 Wickham unit was used for another VIP special when Clwyd South MP Simon Baynes played host to the Conservative Party Chairman and UK Government Minister, Amanda Milling. Mrs Milling's visit formed part of her Levelling Up Tour during which she is visiting areas which are part of the UK Government's Levelling Up agenda to provide jobs and opportunities across the whole of the UK. Llangollen Railway is part of an area bid for Levelling Up funding to help create opportunity and economic prosperity in Clwyd South. The picture shows the Wickham rubbing shoulders with Simon Baynes MP and the Rt Hon Amanda Milling MP at Llangollen Station after providing a return trip to Berwyn for them and representatives of the Railway. 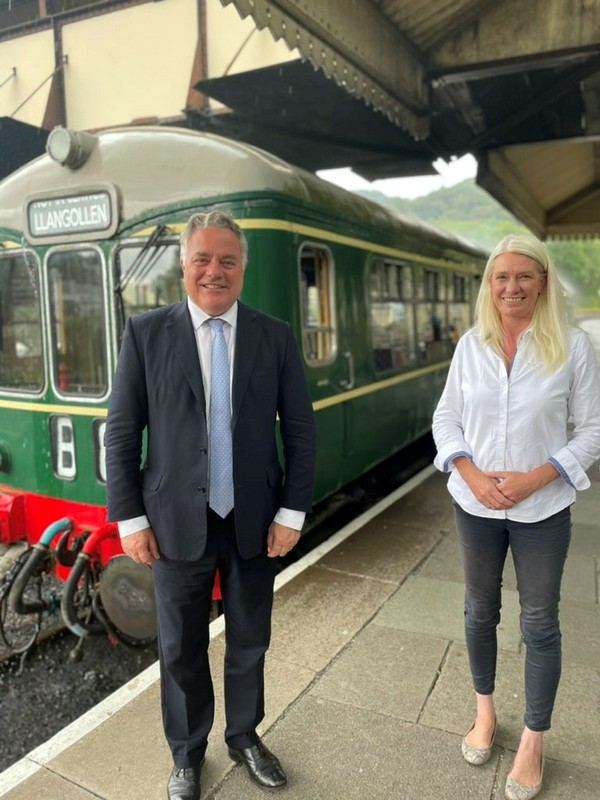 Meanwhile the class 108 has been busy providing the 'normal' passenger services in the shape of the so-called Berwyn shuttles which commenced on Friday 9th July and ran every Friday, Saturday and Sunday before increasing to almost daily from 3rd August. The frequent, short journeys have proved very popular with members of the public even on days when the weather has been less than ideal as can be seen in the following picture which was taken on Saturday 7th August... 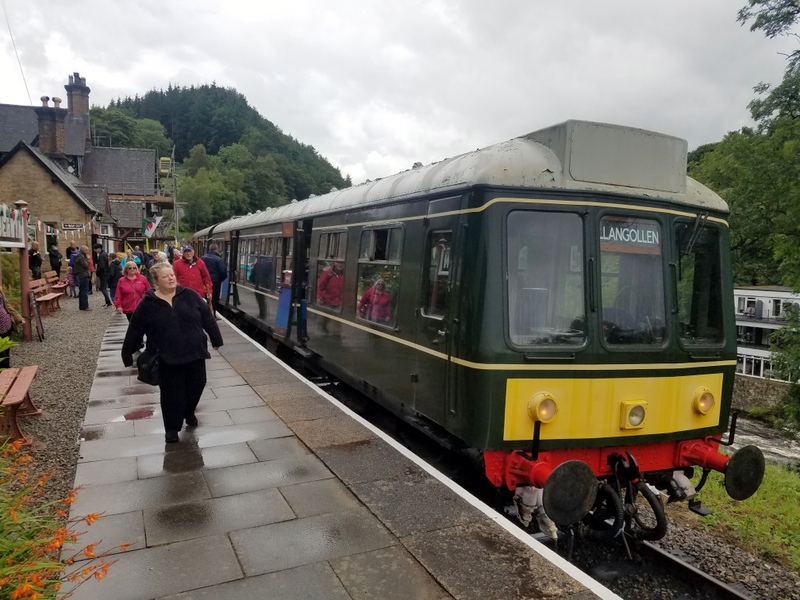 On its way back to Pentrefelin that day, the class 108 encountered 'kettle' no. 3802 which was eagerly awaiting its turn to play on the main line for some test runs to/from Berwyn... 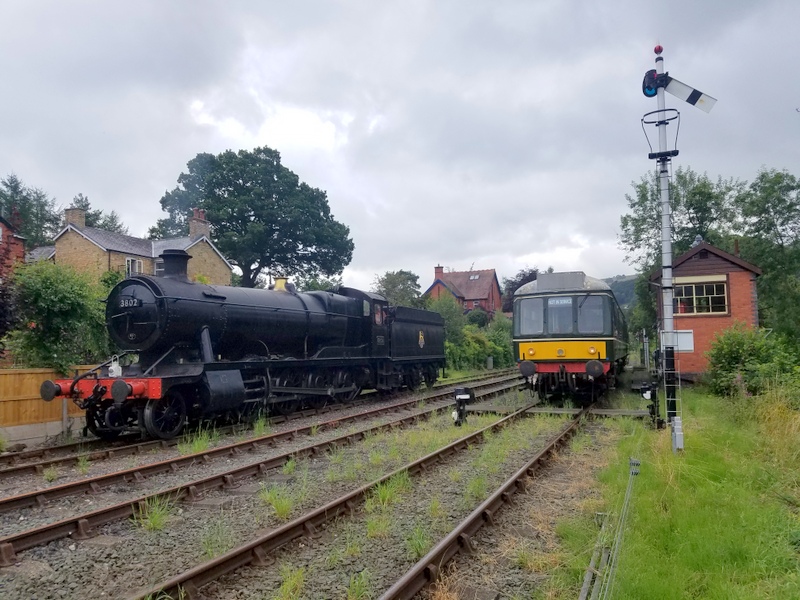 Surely such devices will never catch on :-)

Information about the work that has been carried out on our vehicles at Llangollen and Butterley since the previous report can be found in the unit-specific sections below.


A timber frame that had been constructed as a "homework" project for the vestibule ceiling edge in 50454 was trimmed and fitted... 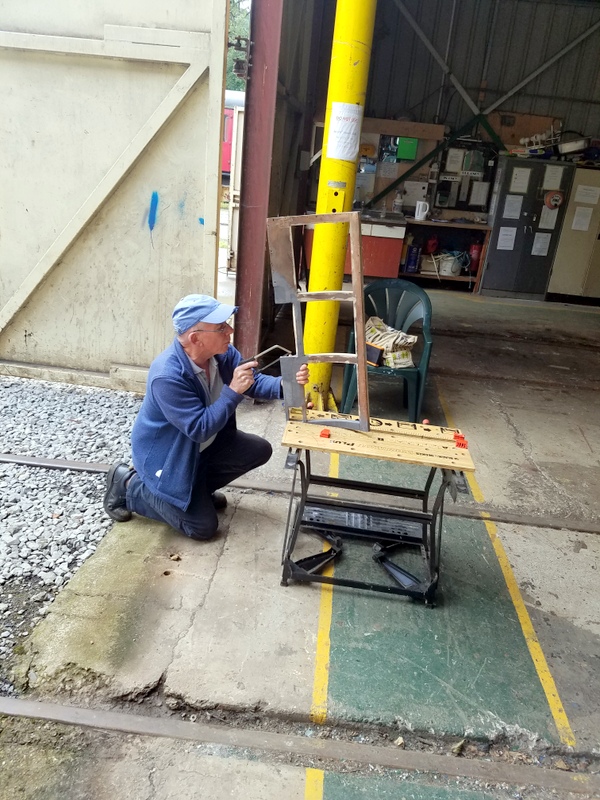 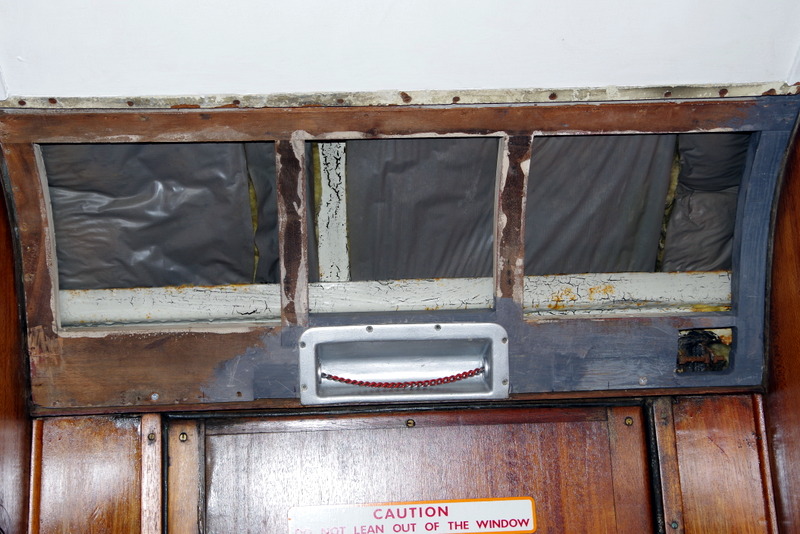 The addition of some beading and gloss paint should complete that particular job.

Elsewhere in 50454 a significant improvement to the ceilings was made by washing them. The pictures show the resultant clean cab ceiling and the ceiling of the guard's compartment part way through the process... 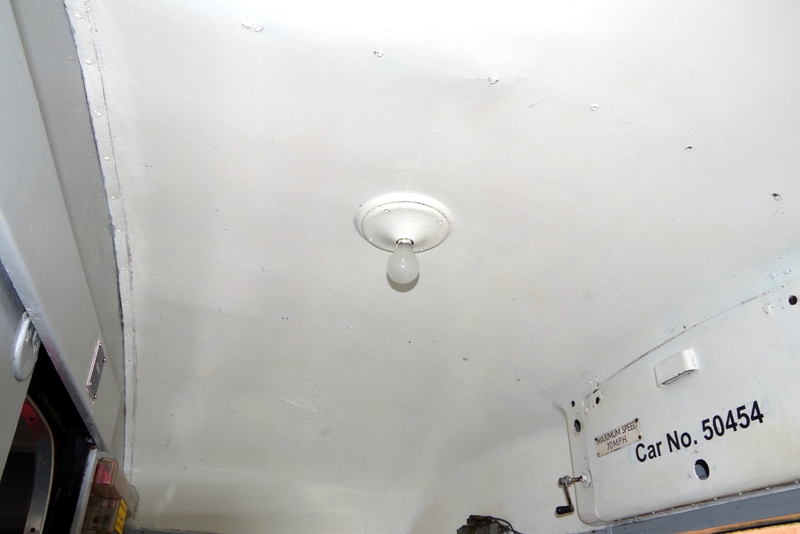 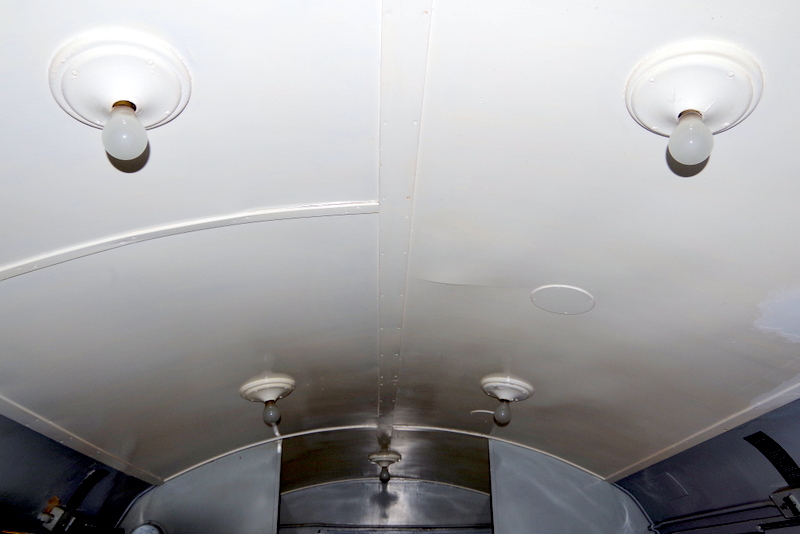 
An assortment of loose paint, which was the result of historic water damage, was scraped off various ceiling panels and attended to with primer. We are reasonably confident that the vehicle is now watertight thanks to riveting and painting work (subtly different to riveting painting work!) that was undertaken a little while ago, so the damage should not recur. 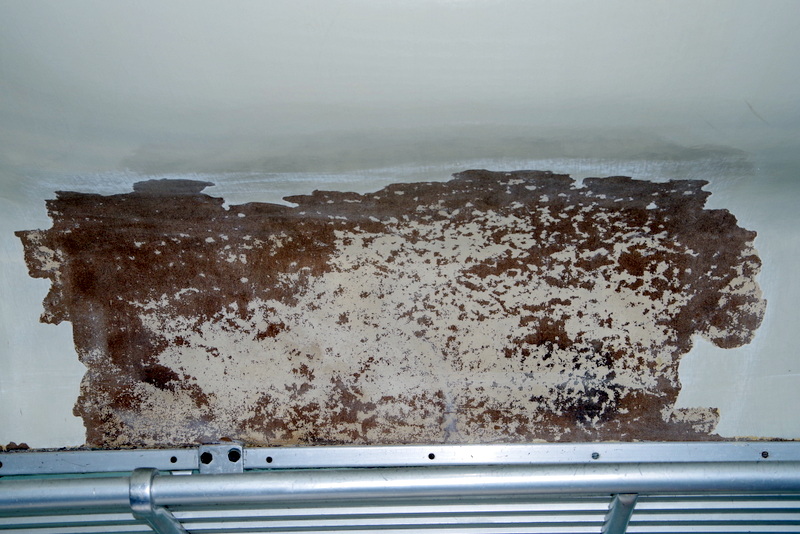 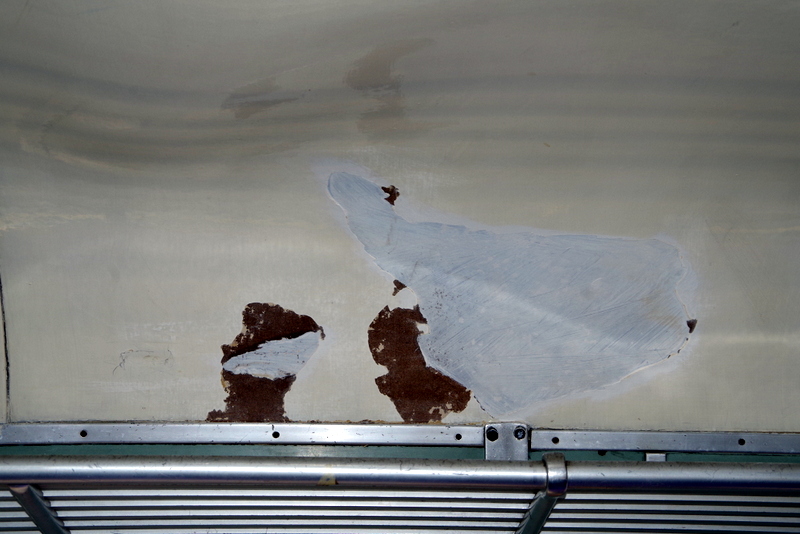 
The project to 'fettle' each of the doors reached the secondman's side of the vehicle where the first door on that side (the secondman's one) was removed, followed by the hinges, and the inevitable rotten areas of door pillar dealt with. The best jobs involve the use of a large hammer and, judging by the tools that are evident in the following picture, that was one such job! 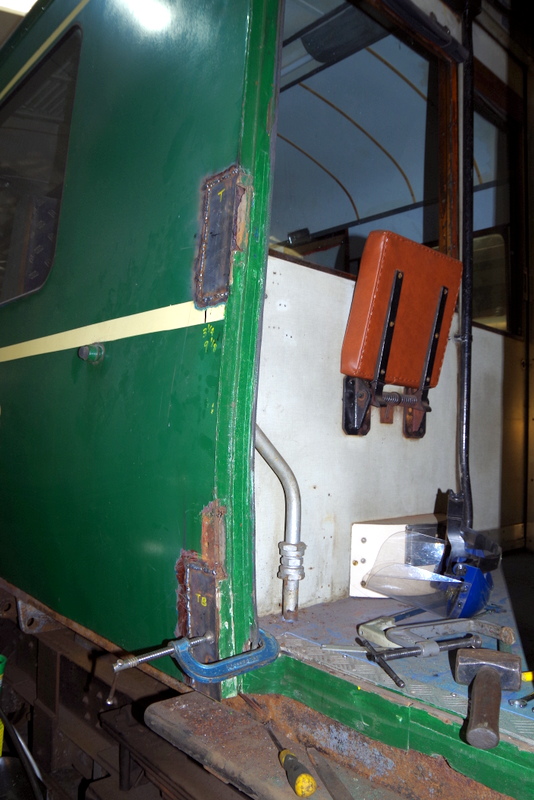 Further work went into the rear bufferbeam and fittings with the application of an assortment of colours of paint and a reduction in the number of parts on the bench. The skill is in painting the right things the right colours whilst simultaneously avoiding painting the wrong things the wrong colours! Some of the solebar also got a coat of black micaceous primer as well. As a result, the rear bufferbeam area is now almost complete apart from painting the white jumper sockets and refitting the jumpers. 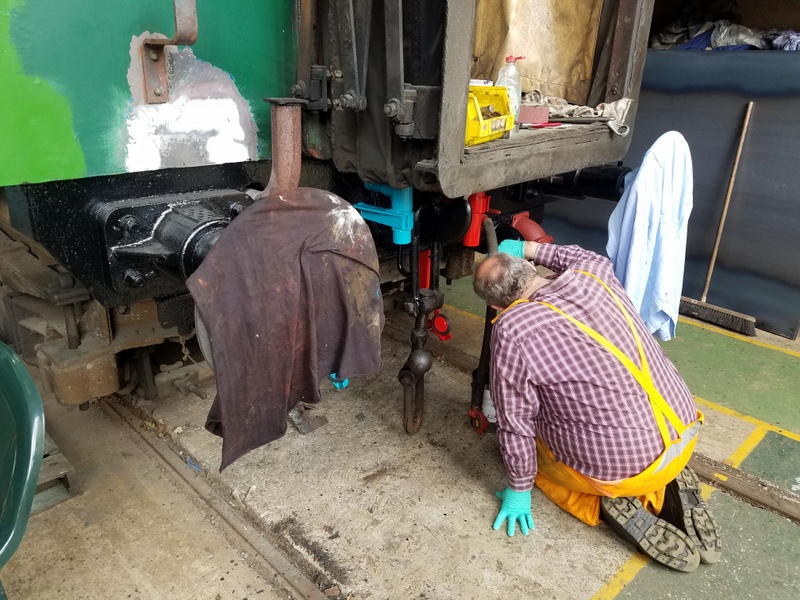 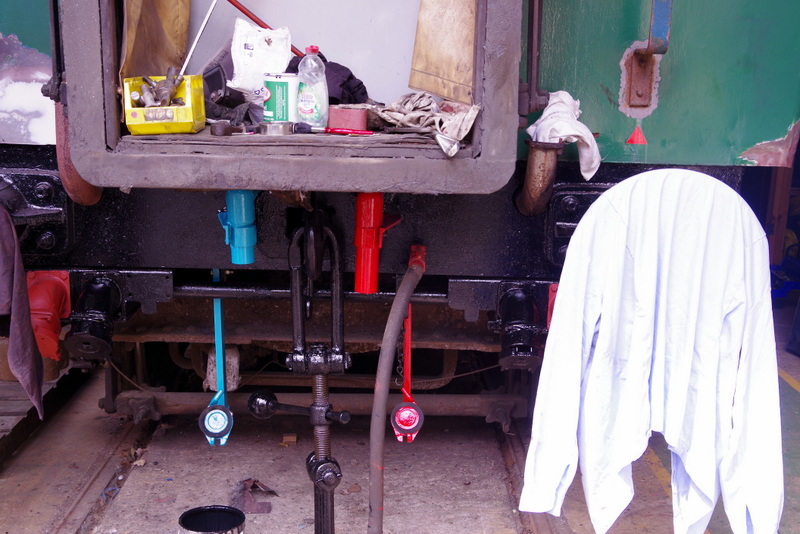 Thanks to Simon Baynes MP, John Joyce and Mike Martin for supplying the pictures.