Since the previous report we have continued the pattern of providing the 'A' timetable service on Wednesdays, Thursdays and Fridays. For the Wednesday services we were asked to provide a 4-car unit to provide sufficient seating capacity for some pre-booked groups as well as the passengers who turned up on the day so we used the green class 108 unit coupled to the hybrid blue/green class 104/108. On the Thursdays and Fridays the 2-car class 108 was used.

The following picture shows the 4-car train at Carrog on Wednesday 20th April with the hybrid unit nearest the camera... 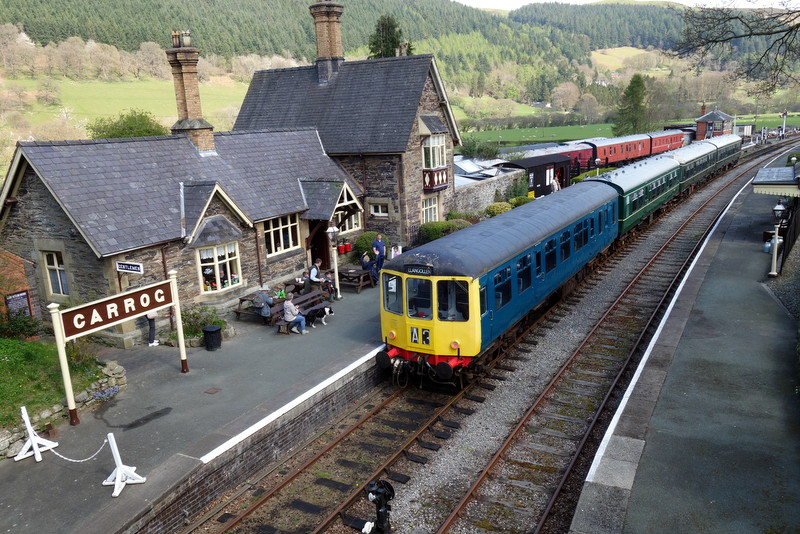 The class 108 was also used on Easter Monday (18/04/22) when the A+ timetable was in operation. The following picture shows it at Llangollen Station alongside a train with a class 08 shunter that was used to provide shuttle services to Berwyn as well as the opportunity for visitors to be a 'Driver for a Fiver' at Llangollen Station...


Information about the work that was carried out on specific railcars at Pentrefelin and Butterley can be found in the unit-specific work sections below.


Regular readers may remember that the class 108 had a brief spell on the naughty step in between its failure at Berwyn on Thursday 7th April and the replacement of the fuel pump on its no. 1 engine the day after.

One of our engineers subsequently opened up the pump to investigate what had gone wrong and was surprised to discover that it had reduced itself to a kit of parts. The following picture shows some of the 'shrapnel' that fell out so it's hardly surprising that it didn't work properly... 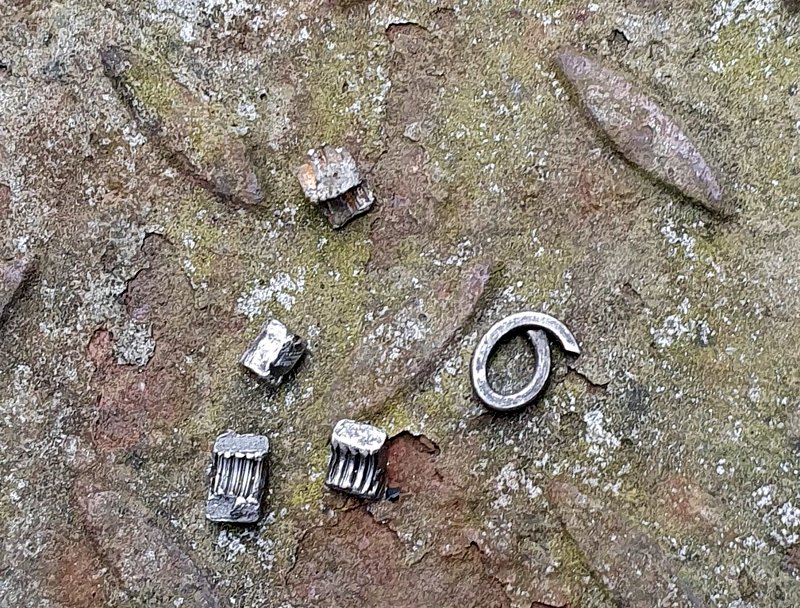 
Having already been dressed in its surgical smock, the Wickham power car was shunted to a suitable place in Pentrefelin Yard for its gritblasting appointment on Wednesday 21st April... 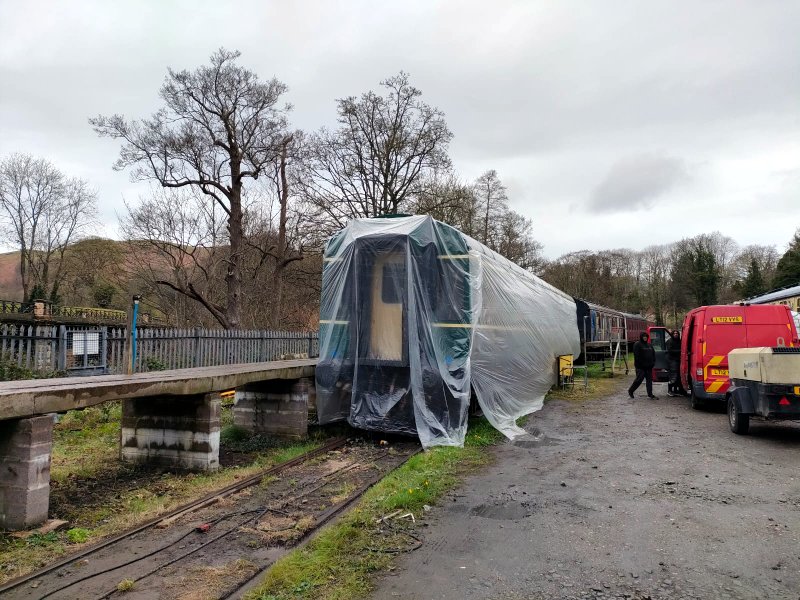 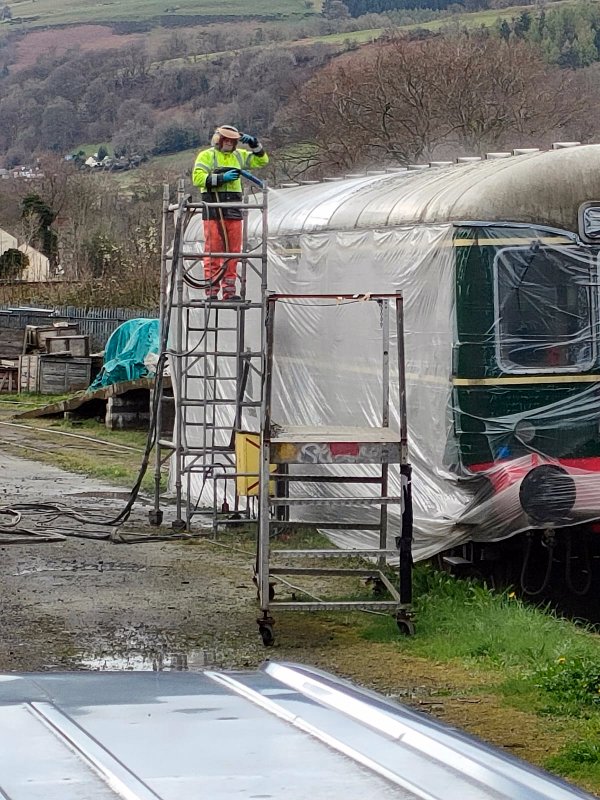 It was expected that the gritblasting operation would remove all of the paint and leave us with a bare metal surface ready for painting but, unfortunately, that turned out not to be the case. The various layers of grey came off fairly easily but there was a layer of black underneath that refused to give in despite the blaster being turned up to its 'full notch' setting... 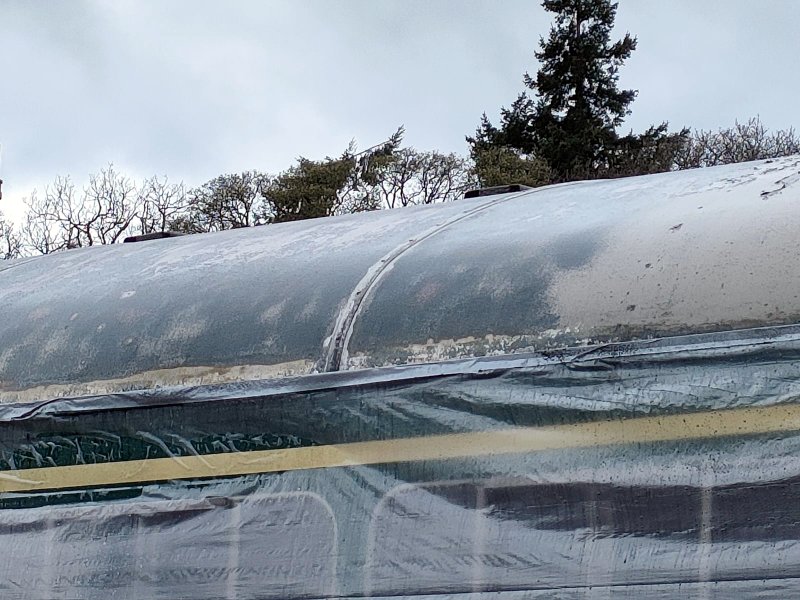 Closer inspection revealed that the black layer was (a) extremely thick and sturdy and, perhaps more importantly, (b) cracking up in places as shown in the following picture so it needed to be removed. 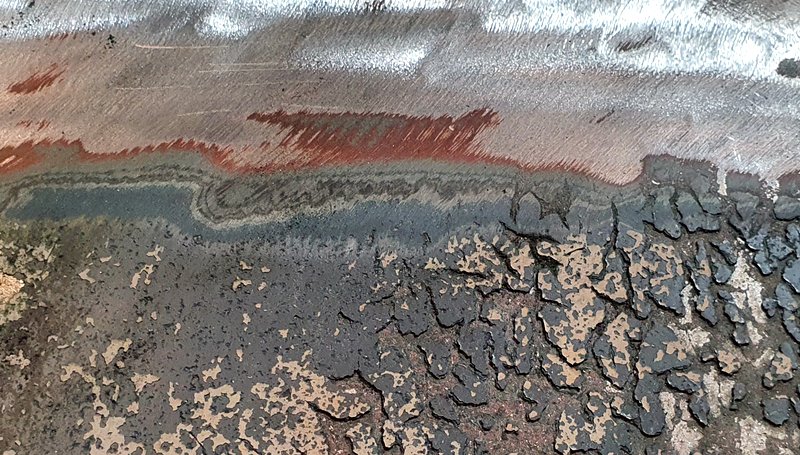 However, the contractor doing the blasting was concerned that the use of the highest setting could result in damage to the roof so a mutual decision was taken to blast everything that was willing to come off easily and leave the rest to be removed by our volunteers using more traditional methods. Despite the setback, the gritblasting had saved a lot of time and effort but members of our group subsequently found themselves using rather more elbow grease than anticipated. In fact, a team of three people spent the whole of the following weekend tackling it with an orbital sander and two angle grinders equipped with flap wheels... 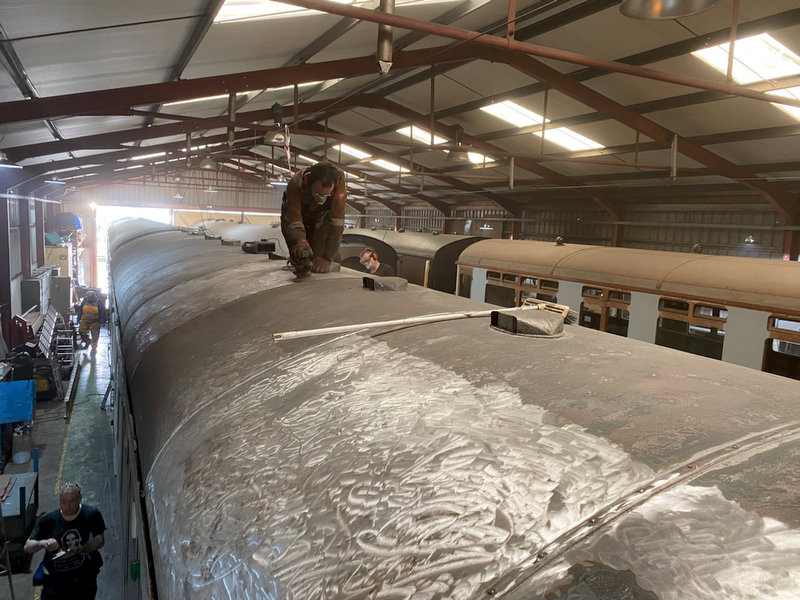 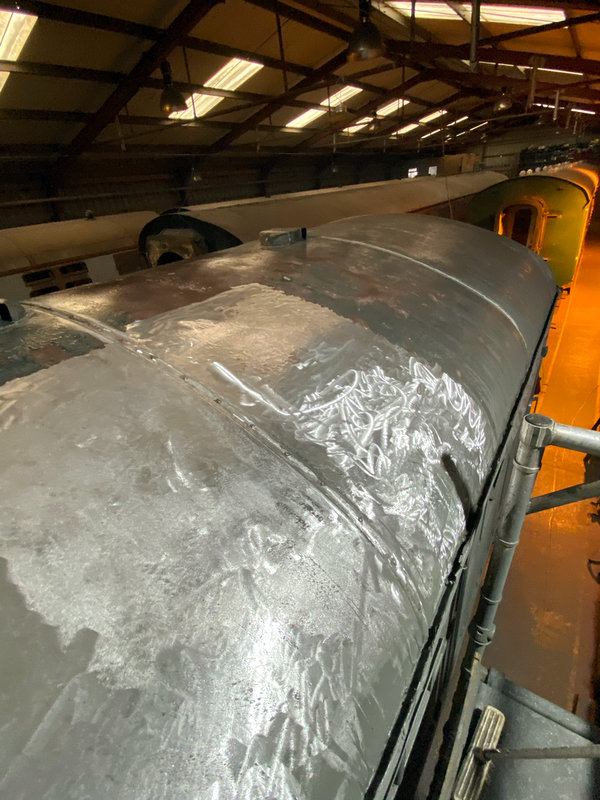 They discovered several layers of paint, even after the gritblaster had removed a few, and noted that it became thicker towards the front of the vehicle (with the cab dome being the 'piece de resistance') - something that not only added to the increasing weariness to gradually slow their progress but also left them wondering if a previous painter had had shares in a paint company!

The following picture shows the state of the roof after two full days of 'flapping' and sanding. There is still an area of cab untouched, some sanding of the 'flapped' areas along the sides to do, and some riveting to deal with. N.B. The shiny appearance is due to it having been hosed down to assess the situation just before the picture was taken. 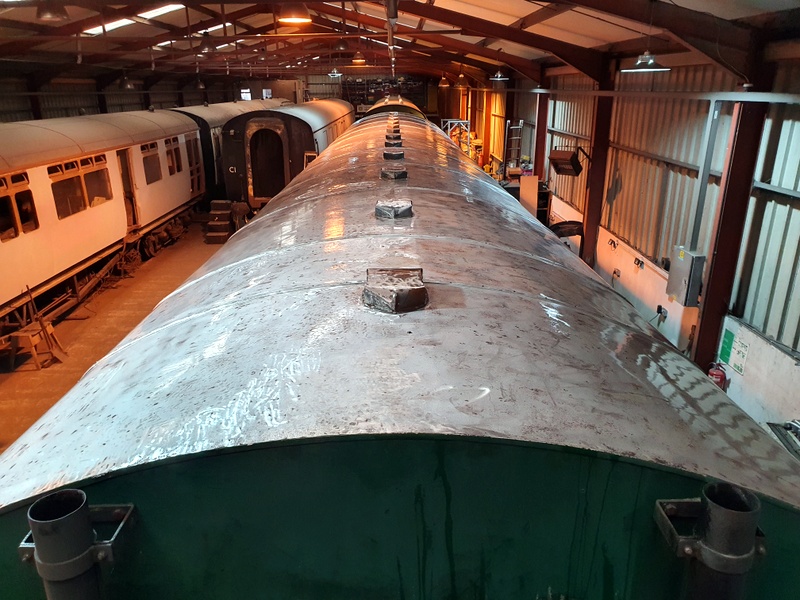 
A full day was spent facing up the timber used to hold the destination box in place. The following pictures show the finished product from different angles... 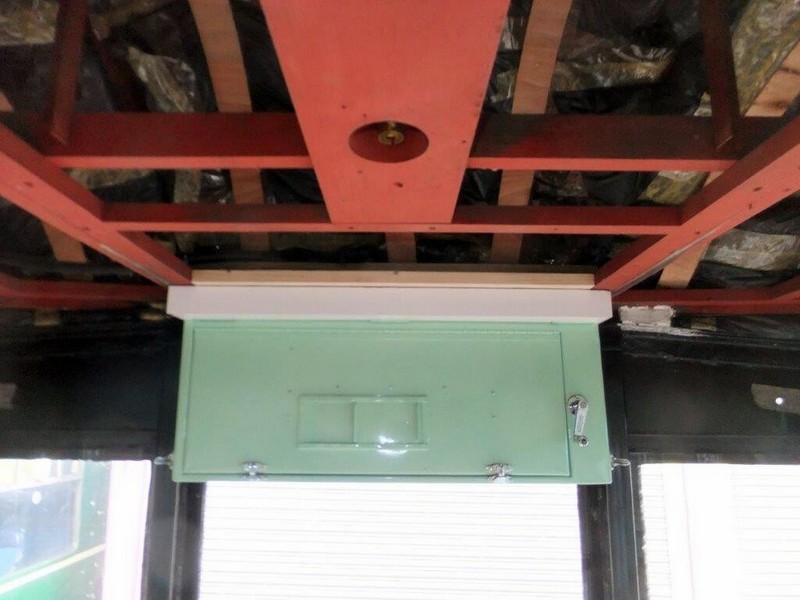 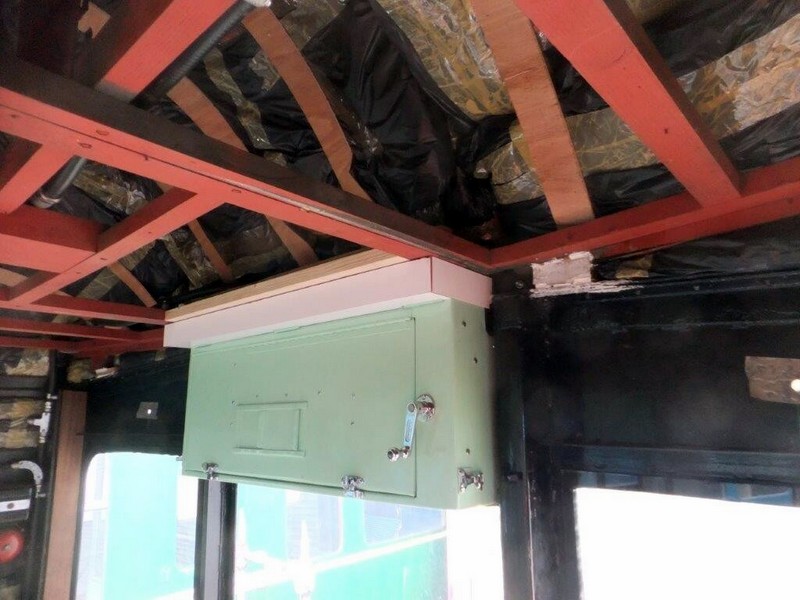 
Since the previous report our railcars have provided the weekday 'A' timetable service and, during the weekend of 9-10 April, they were joined by another train when a class 08 Diesel shunter was used to provide some shuttle services to/from Berwyn and provide visitors with an opportunity to be a 'Driver for a Fiver' at Llangollen Station.

All three operational railcars were used during the period. The class 109 Wickham unit did the honours up to, and including, Sunday 3rd April, after which it was taken out of service and covered in 'cling film' (see the Unit-specific work section below for further information). The baton was then passed to the class 108 which, unfortunately, suffered an engine failure while climbing Berwyn Bank on its last trip to Carrog on 7th April, resulting in the need to click on 'undo' and return to Llangollen. Fortunately, it was back in action two days later following the replacement of a faulty fuel pump and, in the meantime, the hybrid class 104/108 unit got to play out for a day.

The following picture, which was taken on Sunday 3rd April, shows (from left to right) the Wickham class 109 passing Pentrefelin with the service train and the hybrid class 104/108 and the class 108 in the depot. 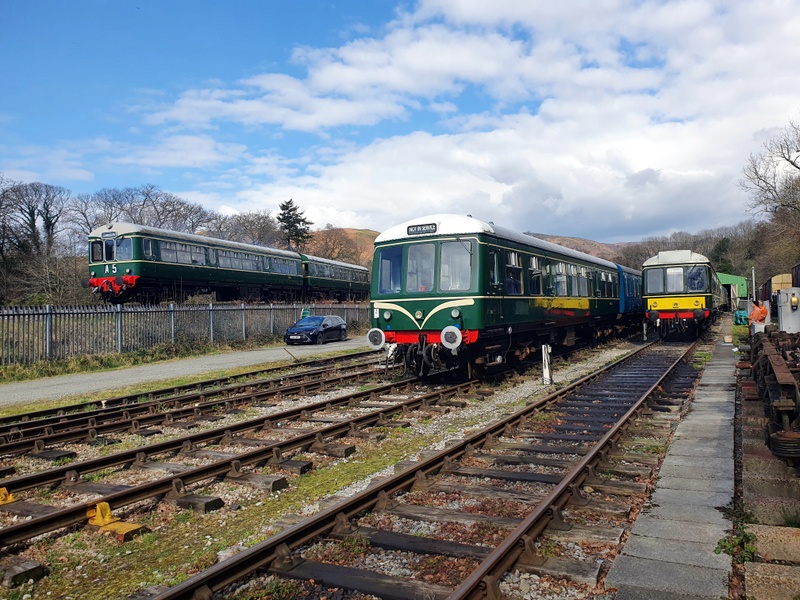 
A seemingly random selection of lengths of steel tube was used to construct a stand to support a vacuum brake cylinder. It should make cylinder overhaul and testing more straightforward and is likely to be used 'in anger' at our next meeting when we hope to service one of the cylinders on the Wickham trailer car 56171. The following picture shows the newly-constructed stand being modelled by a vacuum cylinder... 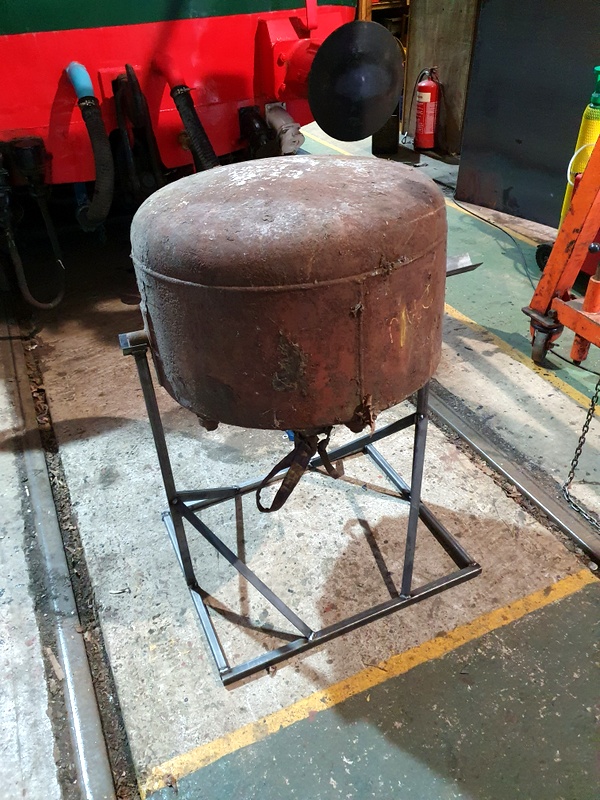 The following picture of the hybrid class 104/108 unit at Pentrefelin was taken from the cab of the class 108 trailer car... 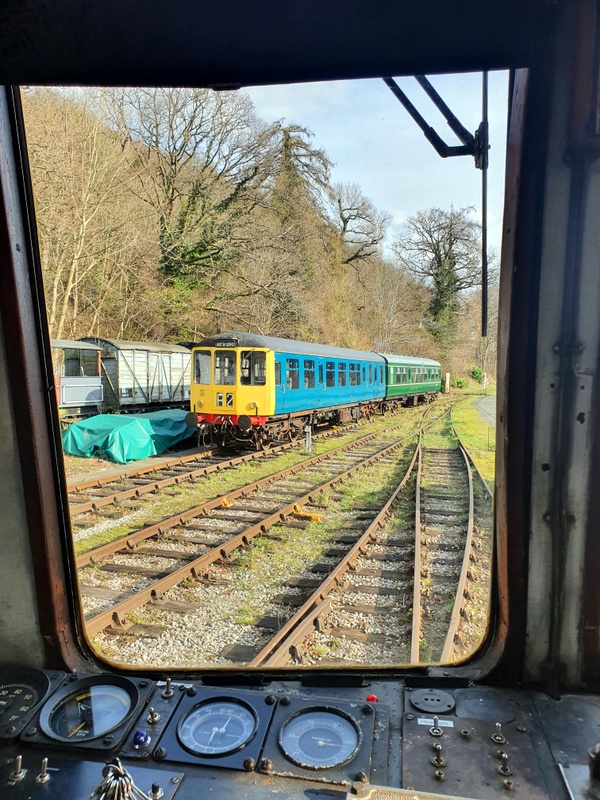 Information about the work that is directly associated with railcars can be found in the unit-specific work sections below.


With the aid of a pillar drill, a new and improved method was devised for drilling the Z-section beads that fit over the bolts above the glass in the windows. This was the first of many that need to be processed... 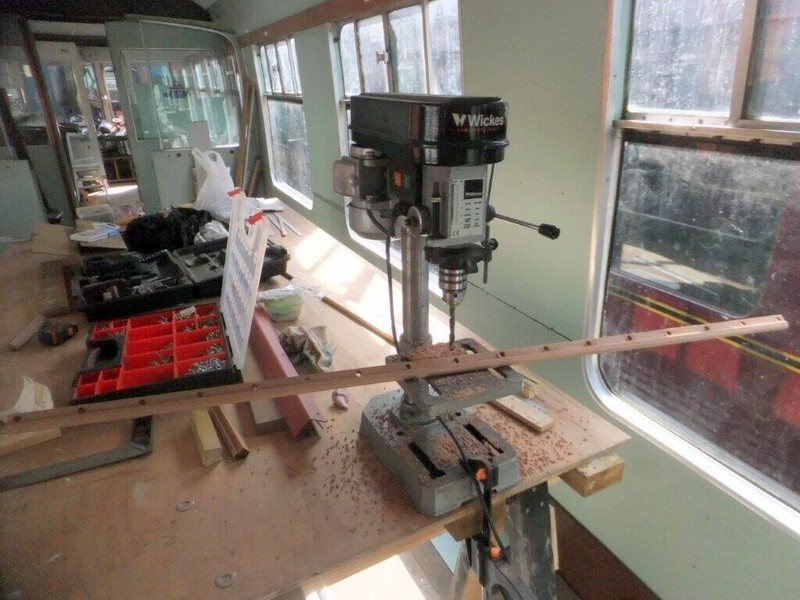 A 10mm square piece of wood with three notches at the back to fit over some weld blobs was constructed to go above the secondman's door... 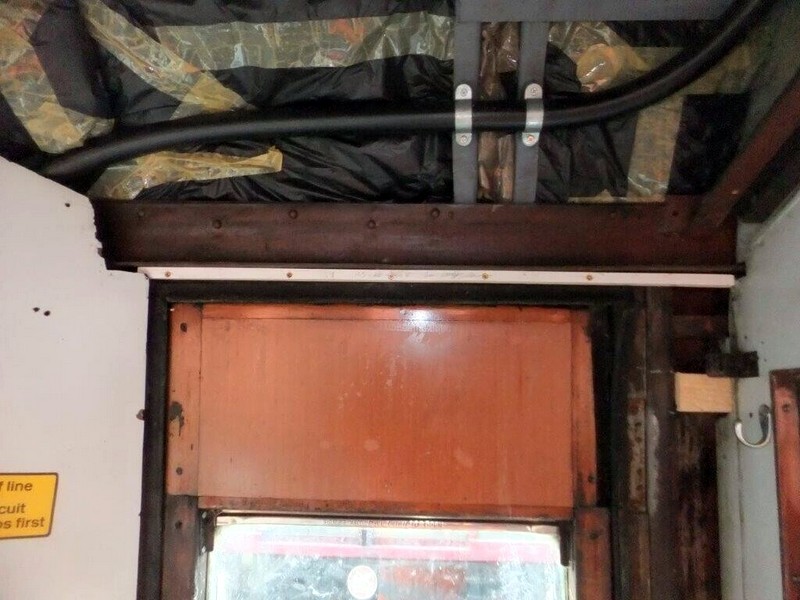 A piece of wood 6mm thick was attached to the underside of the frame that supports the panel over the sliding door in the vestibule. This brings that frame to the same thickness as the piece on the other side of the door... 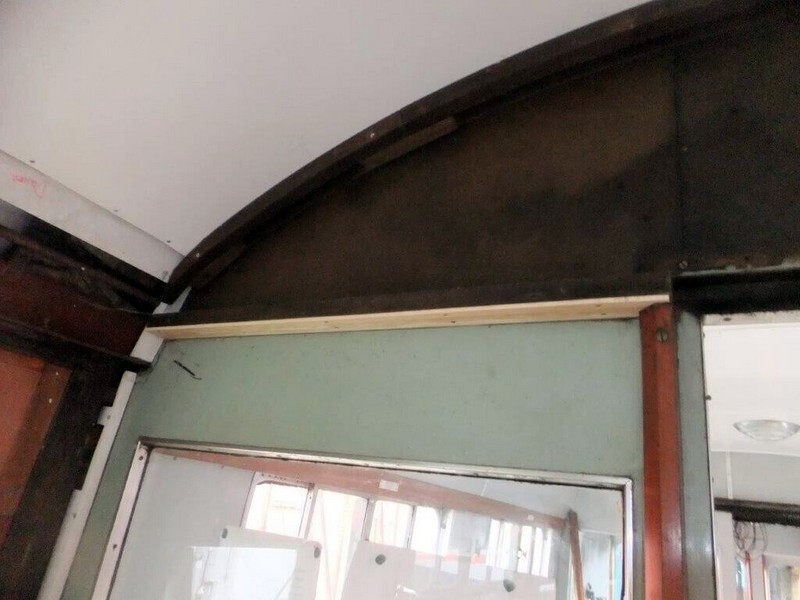 
Following an external wash, some parts of the chassis and body were given licks of paint and polish respectively... 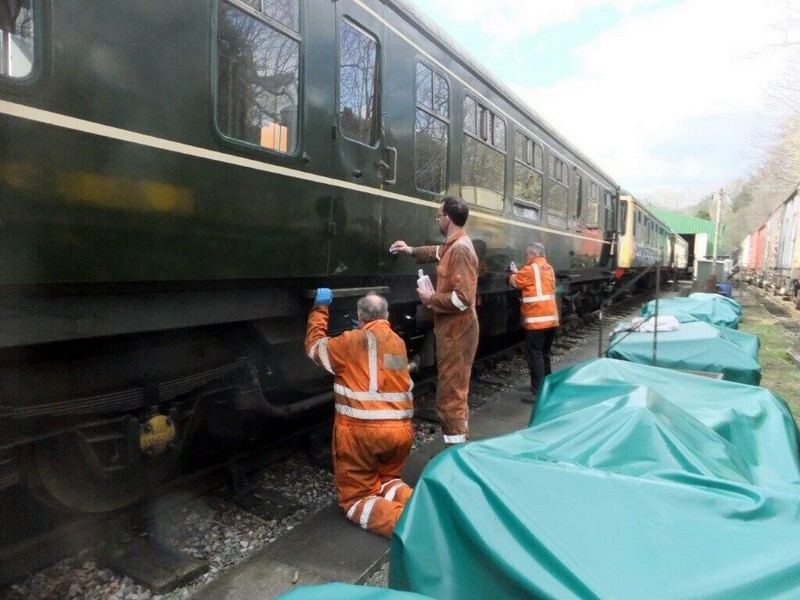 As reported in 'Out and About' (above), the unit was, unfortunately, declared a failure at Berwyn during the final trip to Carrog on Thursday 7th April and it had to return to Llangollen. One of our engineers examined it the next day, diagnosed/replaced a faulty fuel pump, and the unit was then able to return to traffic on Saturday.


Local spokesperson Ffwl Ebrill explained how, following a review of the fleet, the Wickham's status had been promoted to 'treasured artefact' - something that required it to be wrapped in 'cling film' immediately (if not sooner). The power car 50416 was processed on Monday 4th April (three days late!)... 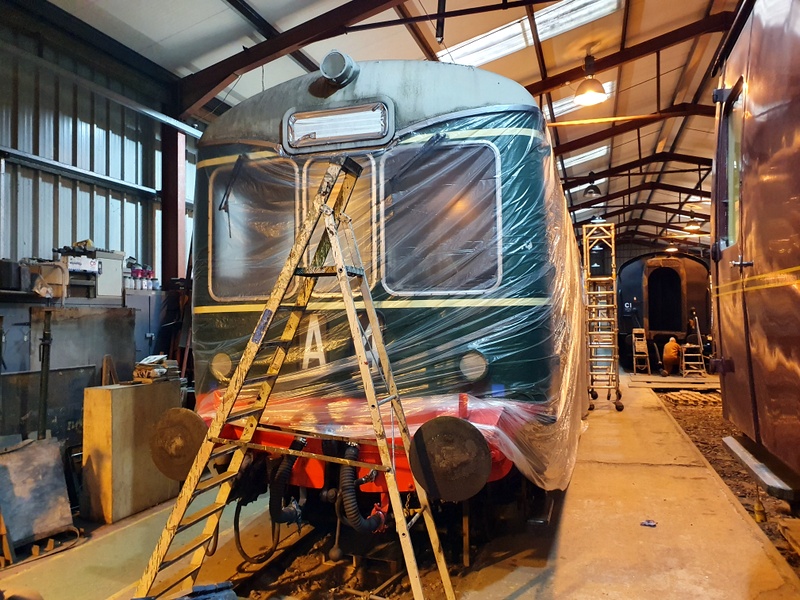 Others claimed that the transformation was, in fact, temporary and had been carried out in readiness for a forthcoming appointment for the roof to be gritblasted.


The final passenger door was removed so that the locks and 'scissors' could be overhauled. More bits underneath got painted in an assortment of colours, and more paint was scraped off the edges of the three doors that had already been removed from the vehicle.


It was noticed that some of the recently-installed wall panels were somewhat distorted, albeit only when viewed from certain angles. The team carrying out the restoration conducted some tests to establish the cause and then produced a recipe for putting it right. It goes without saying that the need to redo something that has already been ticked off as done is not good for morale but the team leader summed it up with a shrug of the shoulders and, "All in all this is what rebuilding something like a DMU is all about - nothing is square, level or flat."


Thanks to Allen Chatwood and John Joyce for supplying the pictures.