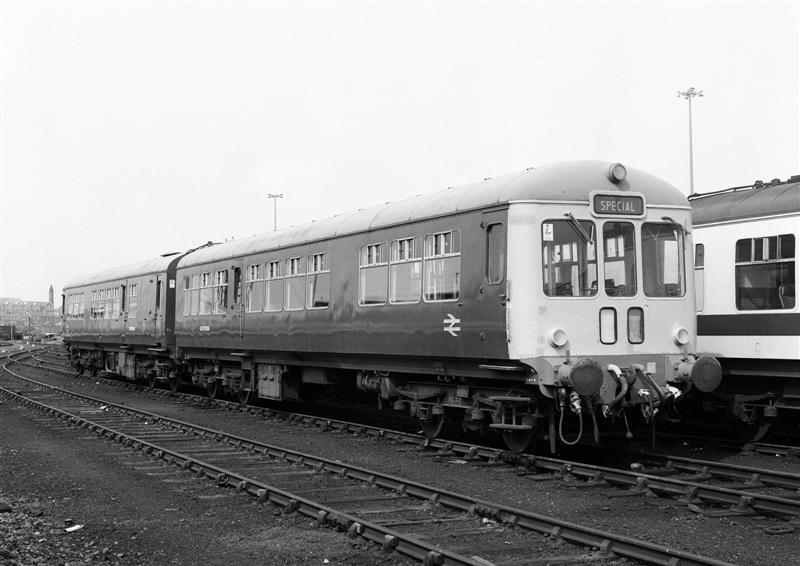 56171 after conversion into a general managers saloon, stabled at York in 1979. Photo By Rail Photo Prints.

This Driving Trailer is the only survivor of its type made by Wickham of Ware in 1957. Introduced to the Eastern Region on East Anglian branch line services it has always been used with its current partner 50416, and so it’s history closely follows that of its sister vehicle.

The coach is of lightweight construction and relies for its strength on a box girder framework around the passenger area, rather than being fitted with a heavy chassis. To aid in keeping weight down it is clad completely in aluminium.

As branch line closures accelerated in the 1960s British Railways found it had too many diesel trains available and as a result the smaller non-standard classes were scheduled for withdrawal, included in these were the five Wickham units.

Two of the five were sold back to Wickham of Ware and were exported back to Trinidad, two were scrapped, and ours was taken out of service in 1967 and converted into a saloon for use by the Eastern Region General Manager. It would remain on these duties until 1980. A blessing in disguise, which allowed this unique set to survive long enough to be preserved, and eventually pass into the hands of our group..

As can be seen 56171 was considerably modified for departmental service. The interior was completely gutted, with the centre section being fitted with a boardroom table and the front saloon being fitted with easy chairs. The doors at the first vestibule were removed and plated over, the toilet was doubled in size and the gutters were raised higher up the body and straightened along the front. All these modifications had to be reversed as part of the restoration programme, although this was much aided by the interior having to be completely stripped out so that the asbestos contractors could remove the blue asbestos insulation. 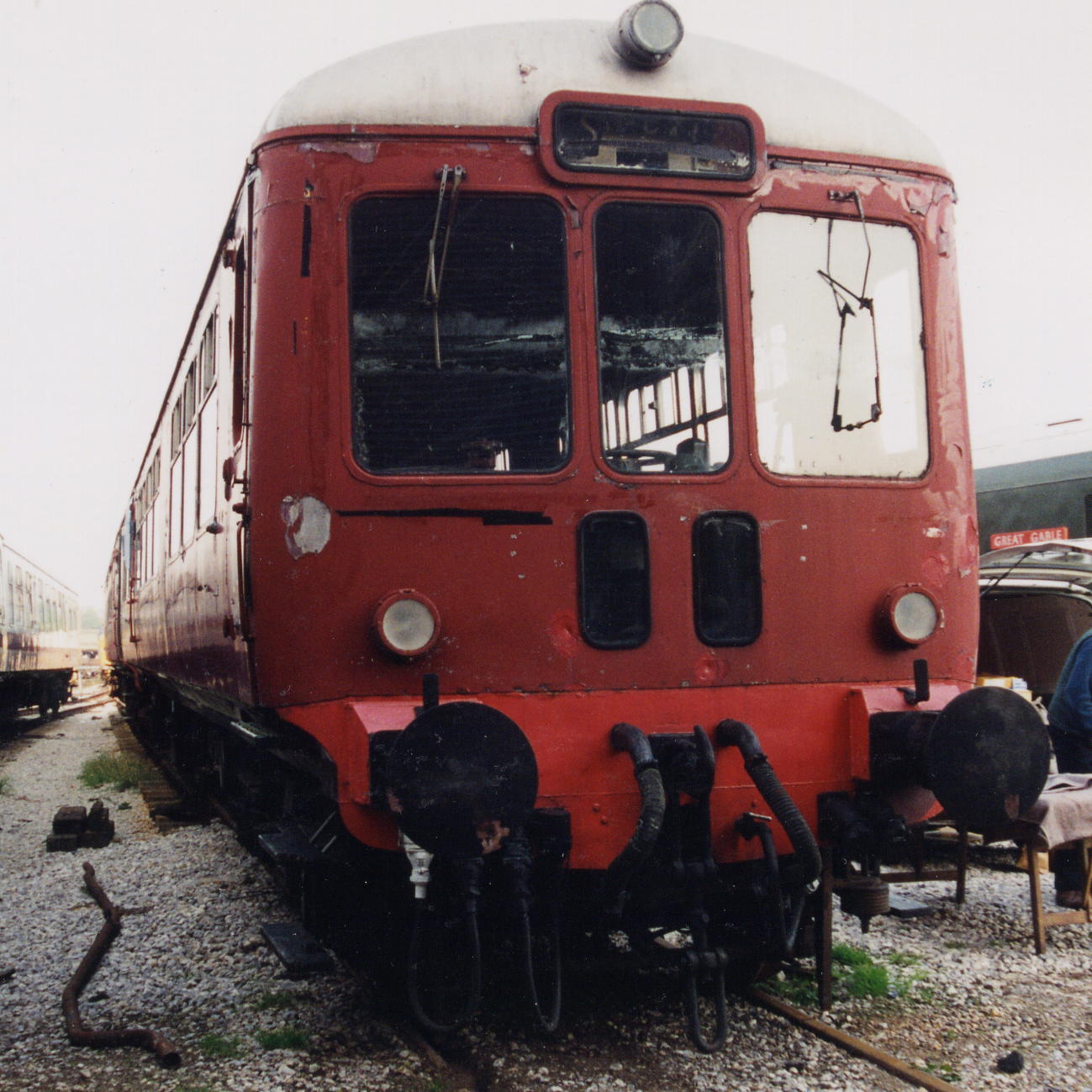 56171 before its rebuild. Photo By Evan Green-Hughes.

Originally preserved at the Chasewater railway it arrived there in 1981. The vehicle was modified to provide some standard seating, a bar and a lounge area, and was used for several years on the lines steam hauled services, paired with a Gloucester Class 100 trailer car.

Withdrawn in the early 1990s originally with the intention of restoring the vehicle, it was stored and began to deteriorate. Heavily contaminated with asbestos and in line to be scrapped.

In 1994 our group purchased both 56171 and sister vehicle 50416, and moved them both the Midland Railway Butterly to undergo a comprehensive restoration. This would take 10 years to complete, and was aided by a £129,000 award from the Heritage Lottery Fund.

In late 2003 this work was nearing an end, and the vehicle was moved to our main base at Llangollen before being launched into service as our flagship unit in February 2004. 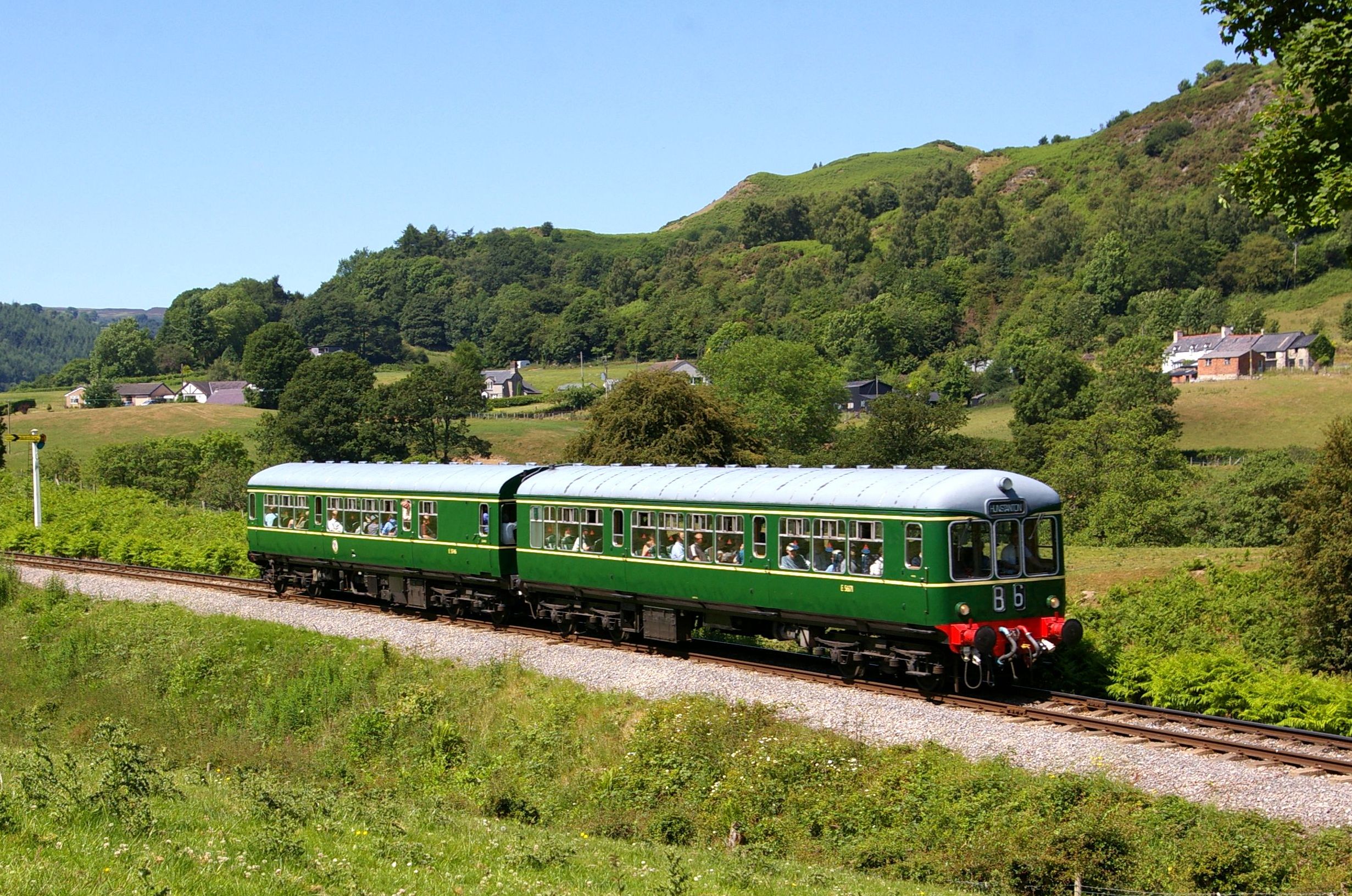 The Wickham has been in use at Llangollen since launching into service in 2004, and has completed 11 years of running clocking up just under 18000 miles in service.

The set continues to be the flagship our fleet, and will be in service for many years to come. 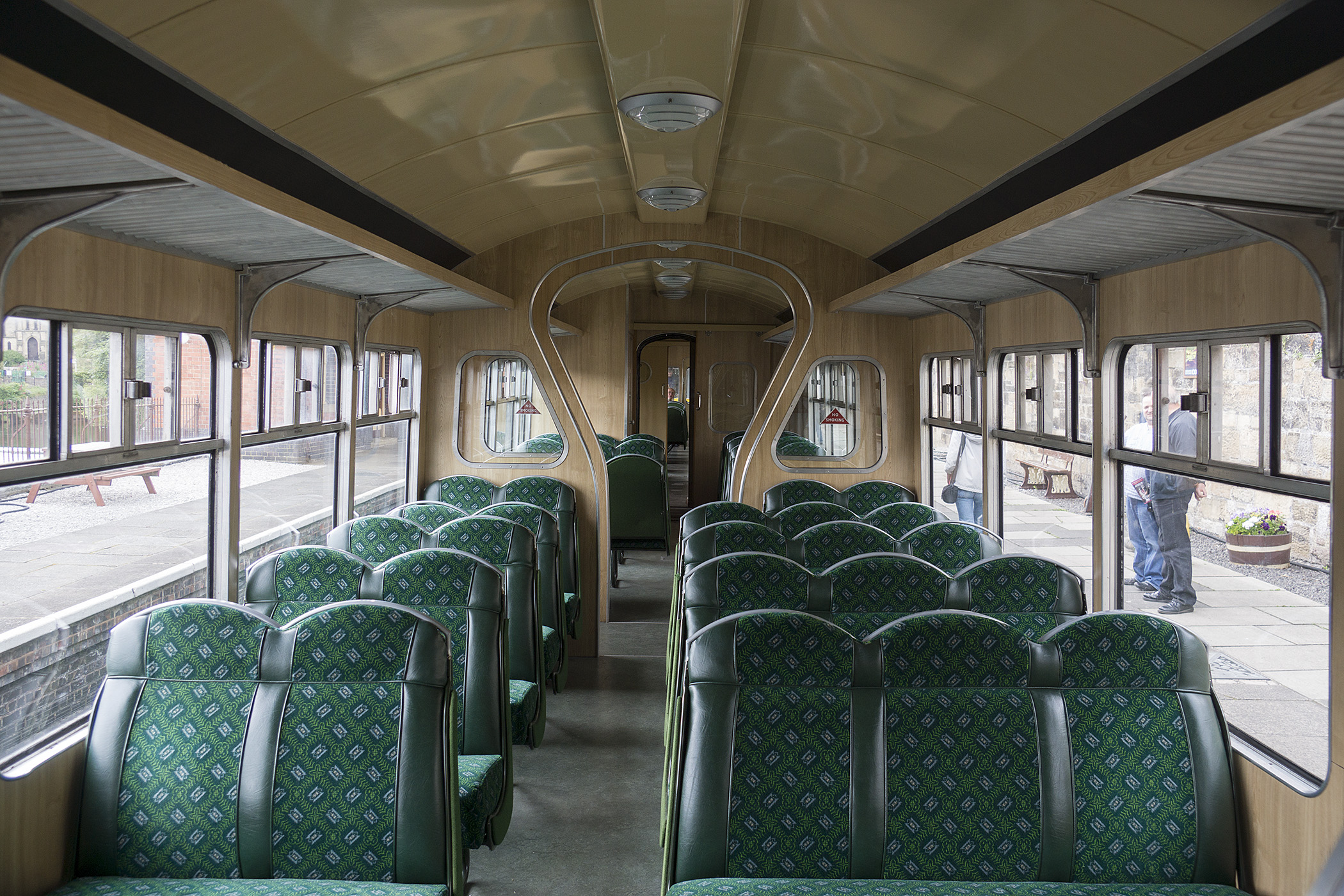 Standard class saloon looking towards the the toilet compartment. Photo By Brian Battersby. 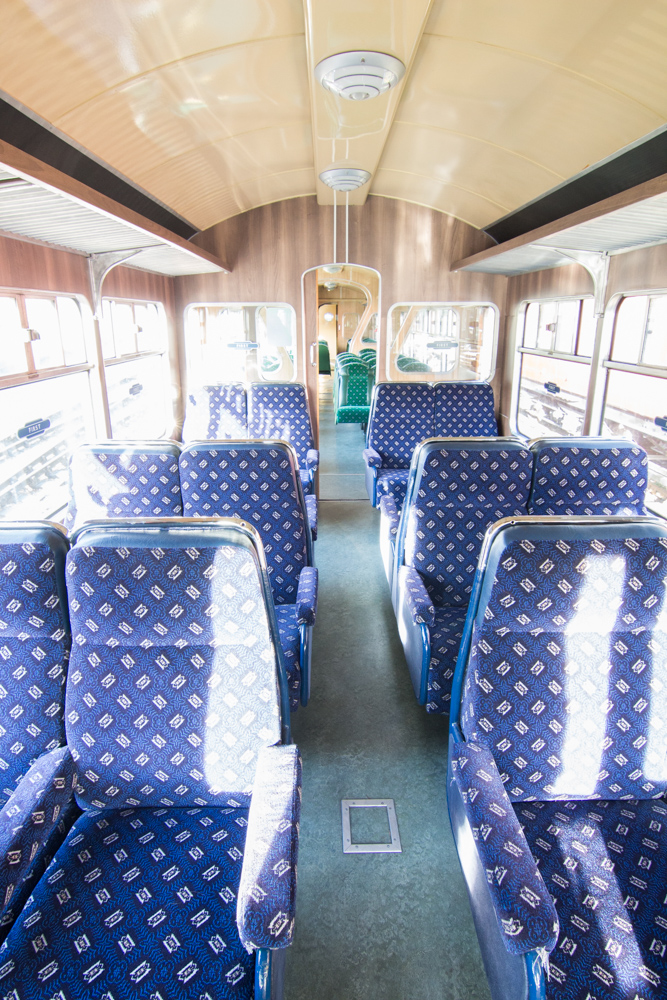 One of the most challenging parts of the Wickham restoration was the interior. During conversion to a General Managers Saloon the original interior was removed in its entirety.

During the 10 year rebuild the entire interior was rebuilt from scratch, using new replica components, built from photos, and works drawings.

The interior of the Wickham units was a unique art deco style, giving the set a memorable appearance to both enthusiast and general members of the public; and one that attracts many passing comments. 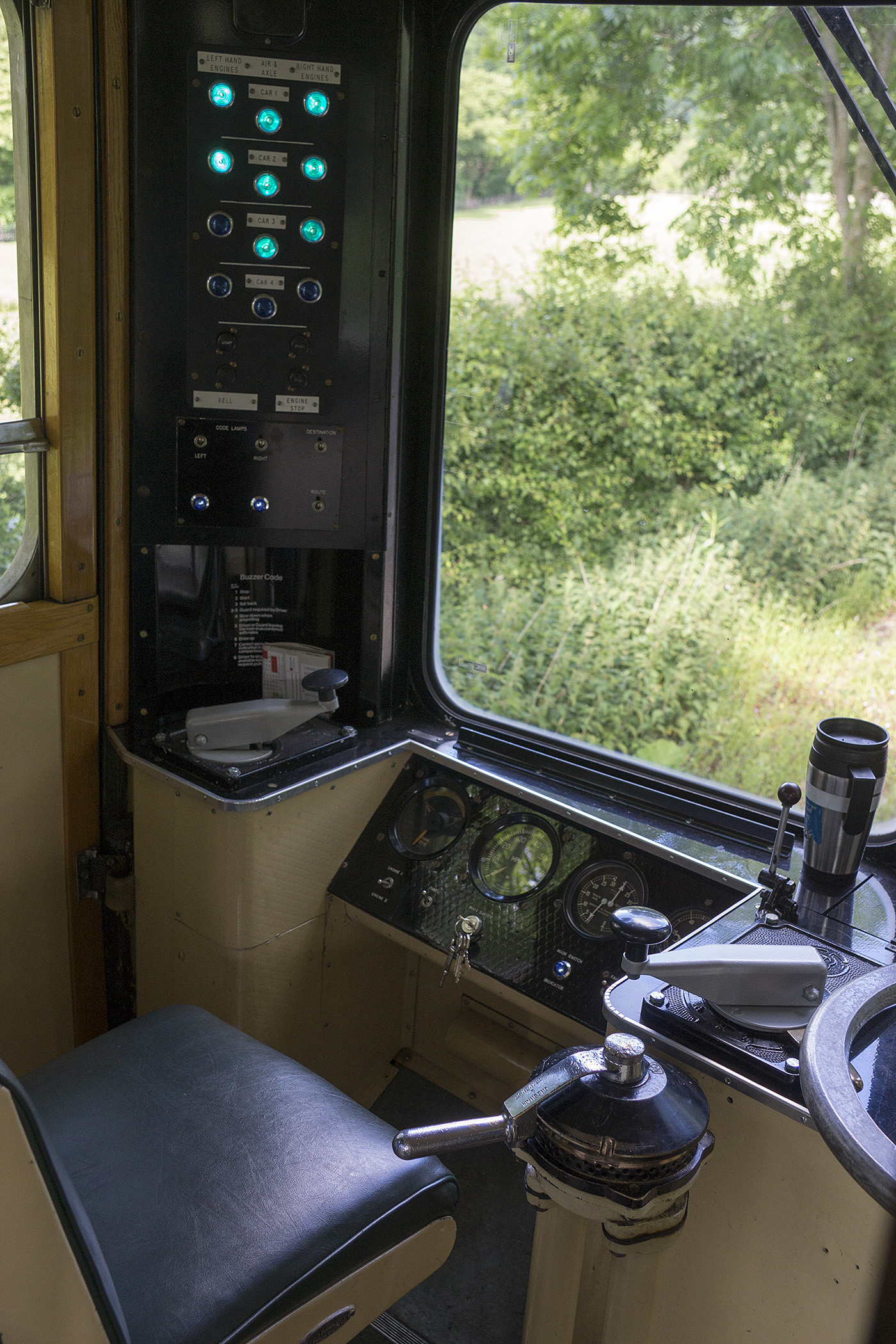 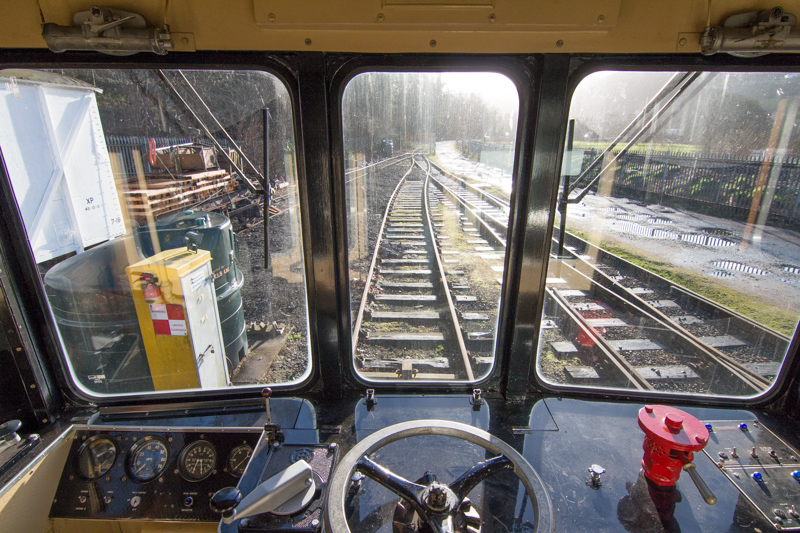 The drivers cab follows the same art deco style of the passenger interior, with a heavy emphasis on cream and green colours of the rest of the vehicle.


Being one of the earlier build of units, the layout of the driver ’s controls was not particularly well thought out. The brake valve is located further back than on the later units. The instrument panel is also below windscreen height. Unlike the vast majority of units only four sets of air & axle and engine lights are fitted.