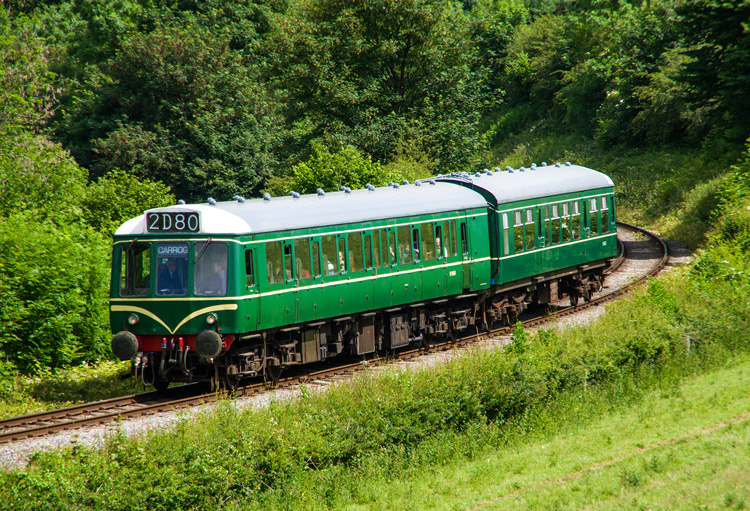 51618 rounding the bend near Carrog. Photo By Unknown

Built by British Railways at Derby in 1959 this Driving Motor Brake coach is an example of the long-wheelbase suburban design, which had high-density seating, with one door per seating bay, this facilitated the faster loading and unloading required by the suburban work. As such it is different to all the other vehicles in our collection.

It is fitted with an unusual mechanical configuration consisting of two underfloor Rolls Royce 238bhp eight-cylinder engines which drive the wheels through torque converters, therefore not requiring a conventional gearbox. This arrangement would become very common in DMUs built after 1984, so it could be said to have been over 20 years before its time.

Originally introduced for the Bedford to London St Pancras services in 1959 the four-car sets (formed DMBS-TSL-TS-DMBS) were given the nickname "BedPan" units. They remained on those duties until July 1983 when the line was electrified and they were replaced by electrical multiple units and withdrawn from service.

Almost immediately after its withdrawal it was saved for preservation and moved to Llangollen, where it has now worked for longer than it did on the main line. 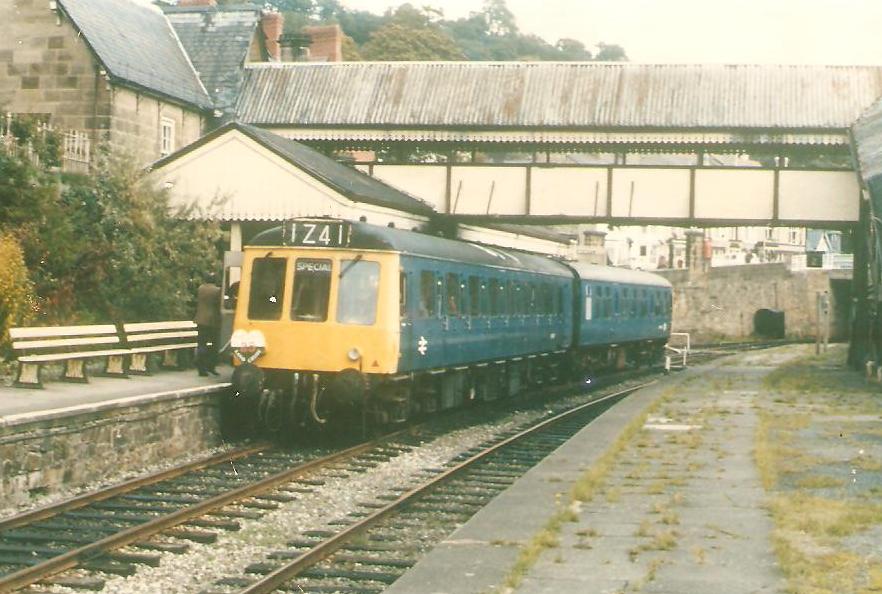 The class 127 DMU was one of the first trains to work at the Llangollen Railway. It is seen here shortly after introduction in 1985 on a train bound for Berwyn (the then terminus of the line) and was, at that time, still in British Railways blue livery. Photo By Unknown

51618 was delivered to Llangollen in 1984, and ran in its as-withdrawn British Rail Blue livery and was used on many of the early services of the Railway, in an unusual pairing with Cravens 56456 (Class 105) trailer car.

As the railway gradually extended the 51618 was inevitably the first form of traction used for public service over the new sections as no run-round loop was required. As such it was the first train across the Dee Bridge and the first to take passengers to Berwyn. During this period some of the doors were taken out of use, and some of the footboards removed, although this would later be reversed in the later 1990s. A non original corridor connection was added, and door fitted between the guards van and passenger saloon, this allowed passengers to walk through the entire length of the train.

In 1986 it received a repaint into Deep Brunswick Green livery. The unit was extensively renovated in 1990 and again in 1997, and had the interior retrimmed in 2000. One of the engines was replaced with a reconditioned unit in 1997 while the other engine received similar treatment in 2007. Also in 2007 one of the final drive units was replaced after suffering a failure in service.

Between 1986 and 1994 this was the only power car on the Llangollen Railway and as such was worked very hard during this period, as a result it has required considerable attention to bring it up to an acceptable standard for regular passenger use. 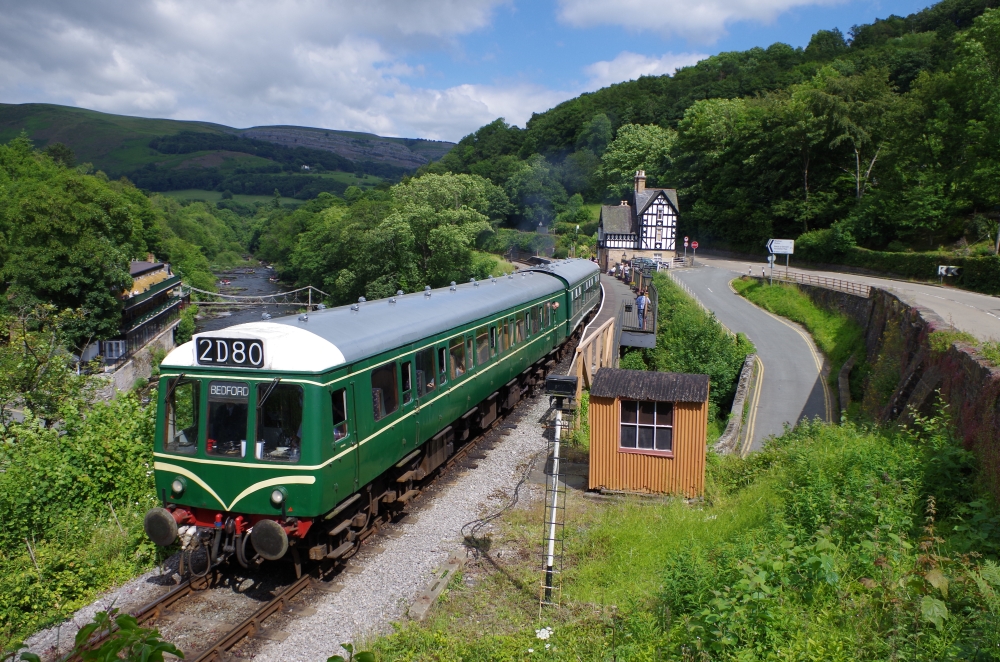 In 2009 51618 received a repaint into Medium Brunswick Green livery, this was completed in 2010 when the roof was fully repainted in grey gloss, and the white headcode box, and cab dome reinstated. During this period the roof was extensively repaired particularly around the gutter and cab areas. This livery was chosen to match the new member of the fleet 56223 (Class 108), which 51618 would be paired with to allow the withdrawal of 56456 for overhaul.

In 2015 51618 + 56223 are still paired whilst the restoration of 56456 is ongoing. The set sees use as part of six car formations at the railways Day Out With Thomas events, as well as off peak services throughout the year.

We are currently refurbishing a replacement bogie which will allow us to maintain the car in service whilst the withdrawn bogie is similarly overhauled. 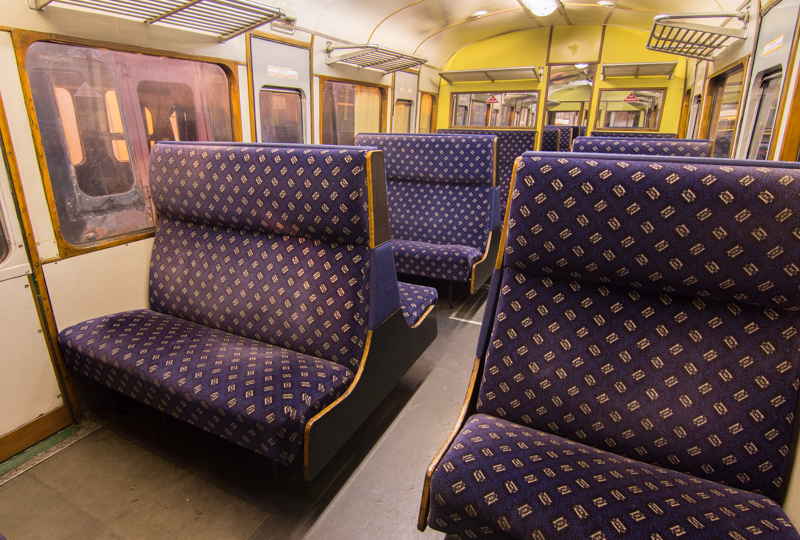 The highbacked seating, and individual bay per door can clearly be seen in this photo. also note that large amount of doors! Photo By Steve Latham 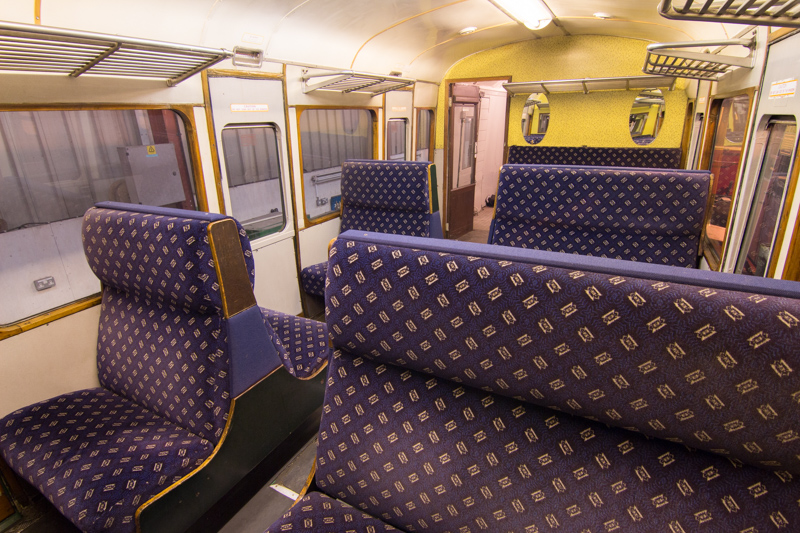 The none original door into the guards compartment can be seen here. As well as the original BR mirrors. Photo By Steve Latham 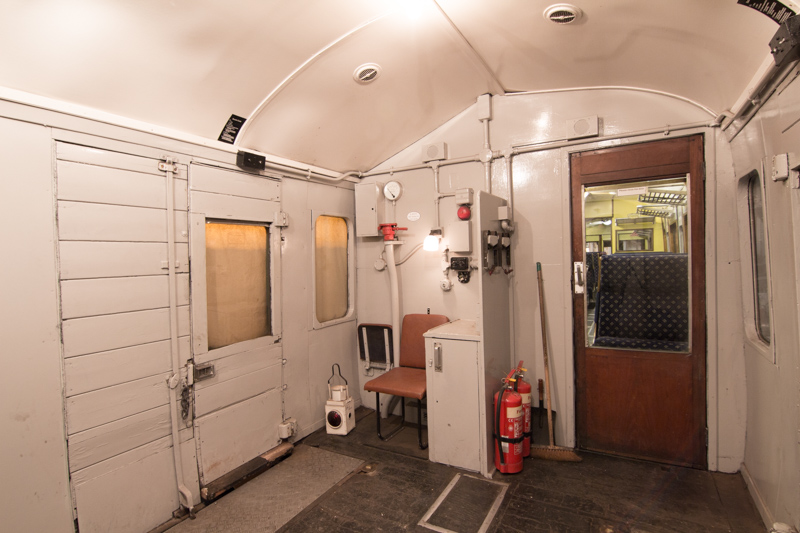 The other side of the door, the guards chair and desk can also be seen, as well as the oil tail lamp we carry just in case of failure. Photo By Steve Latham

51618 was designed for suburban work, and was fitted with a number of 2+3 high back seating bays accessed by their own individual exterior door; This facilitated a faster loading and unloading speed compared to the two door per side layout found on most other first generation units.

The interior wall panelling is Formica, whilst the ceiling is wooden panelling. The window frames are varnished wood. 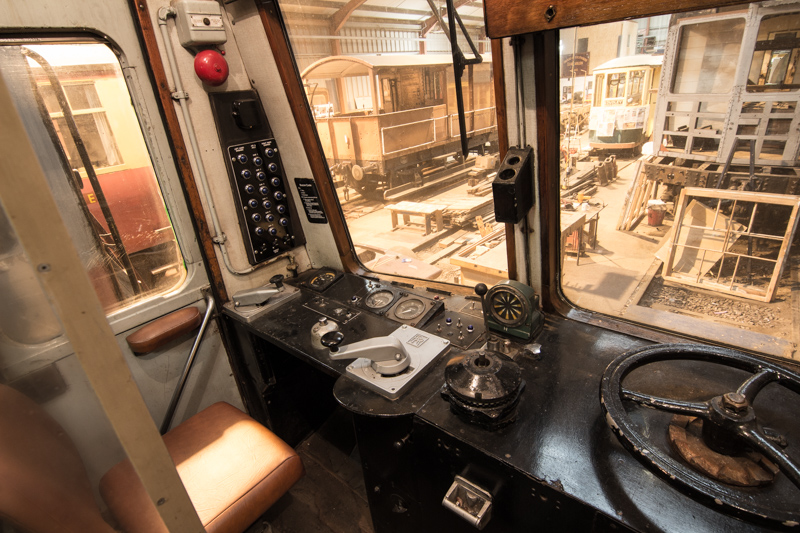 The Rolls Royce gear selector unique to the Red Triangle sets is prominent having recently been powder coated. The AWS sunflower is also visible. Photo By Steve Latham

The cab is similar to the other first generation units, having the standard control layout with the throttle on the left, gear selector and brake handle on the right. The gear selector is different to the other vehicles in the fleet, having a "D" where the usual "4" would be. This was because of the hydraulic transmission fitted to these vehicles which allowed the driver to simply select position "D" and not having to worry about changing gear, assuming of course no mechanical transmission vehicles were in the formation.

This vehicle was retro fitted with AWS and has the AWS sunflower prominently displayed on the desk in front of the driver. It has also been fitted with public address equipment.