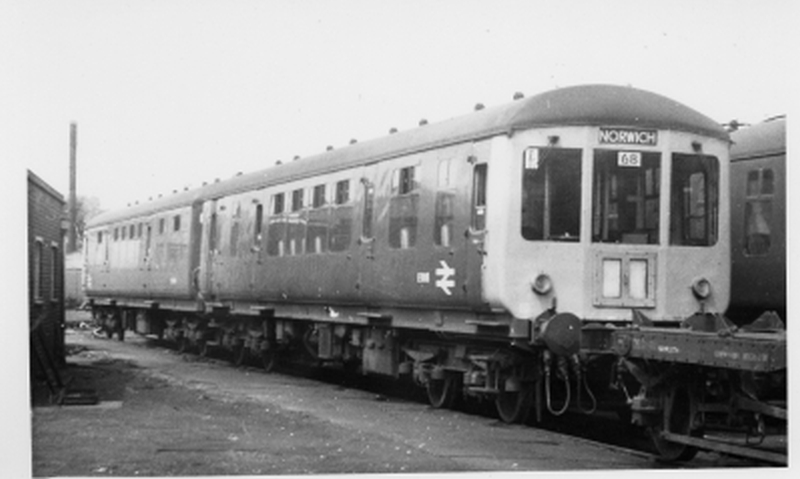 This is the only survivor of a total of 40 class 100 power cars built for the Scottish and London Midland Regions by the Gloucester Railway Carriage and Wagon Co. in 1957.

When British Railways commenced building diesel multiple units in 1954 lightweight construction had to be employed due to the limited power available from contemporary diesel engines. BR’s own units extensively used aluminium to keep down weight but when outside contractors were invited to construct units to a roughly similar outline other solutions were offered.

The GRCW cars were constructed to a semi-integral design in which some of the load was taken by the steel structure of the coach sides and by the floor, thus enabling the elimination of a conventional chassis and lighter construction. The method of construction was unique to these cars which had a quite distinctive appearance and were readily identifiable due to their sharply raked in bottom body sides and unusual roof arrangement. Two batches of 20 each of these vehicles were built and our example is from the second batch, having the normal arrangement of lower marker lights on the cab ends. The power car is still fitted with its original AEC 150hp engines which drive standard mechanical transmission through a freewheel and fluid flywheel.

By the time these vehicles were delivered BR had refined its own “lightweight” design and did not order any further vehicles to this pattern. Over time the Gloucester vehicles suffered from corrosion problems, particularly under the windows, which were prone to admitting water into the body sides and were one of the classes slated for withdrawal as line closures accelerated during the late 1960s.

Our Gloucester power car, 51118, has had a remarkable history; 15 years in main line service followed by 18 years on heritage railways and finally a further 21 years in storage. Its restoration is currently in the early stages and no target has been set for its return to service.

Gloucester Co records show that 51118 left the works on December 18th 1957 as Sc51118, and was destined for the Scottish Region. In plain green livery with cream stripes it was initially allocated to 64A Edinburgh St Margaret's and was paired with 56310.

In Edinburgh it was used from February 1958 for the launch of diesel services on the suburban system, starting with the Corstorphine-Waverley-North Berwick route and the Galashields-Peebles-Waverley service. Services were extended to the Princes Street-Leith and the Mussleburgh routes later in the year. 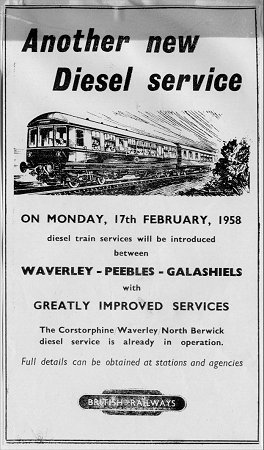 It moved on to Leith Central Depot in 1960 and then Glasgow Corkerhill in 1966 where it was employed on services between Glasgow St Enoch and East Kilbride. However, declining use of the railways in Scotland and route closures led to 51118 moving to Gosforth Depot in Newcastle where it was used to provide cover on the former Tyneside electric system which was being dismantled and returned to conventional operation at that time.

There was a further move, along with many of the other class members, to Norwich in July 1967 where it became E51118.By the early 1970s it had been painted in all-over blue livery with full yellow ends and was paired with trailer 56303.

As more units became surplus as a result of line closures the Gloucester cars were gradually withdrawn and 51118 was taken out of service in October 1972. 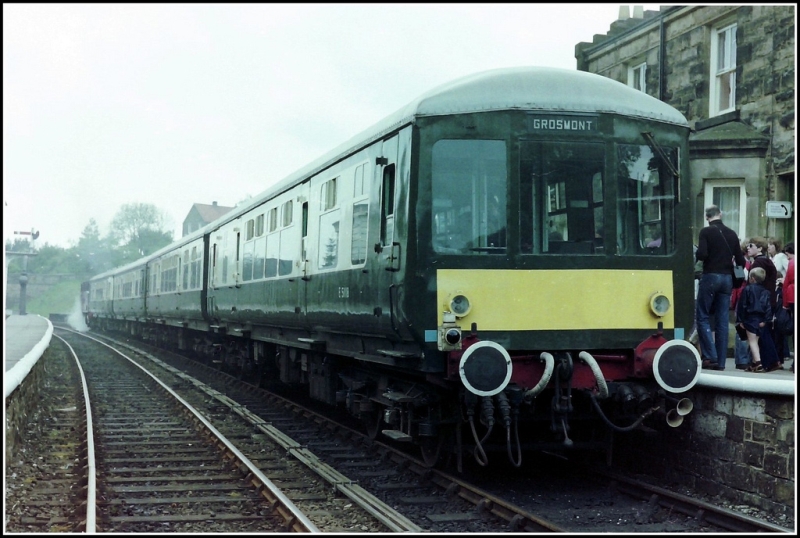 The heritage North Yorkshire Moors Railway, based near Whitby in Yorkshire, had recently started operations and already had purchased one Gloucester 100 set and was successful in purchasing 51118 straight out of service and it arrived at the NYMR in October 1973.

In February 1974 it was joined by its current trailer 56097, making a second two-car set available for use. Its first day of service was Saturday 6th April 1974 but it had an inauspicious start, slipping to a stand on Goathland bank and having to be banked by a steam locomotive. Later in the day it was reformed with another similar power car as a power-twin.

In its early days at the NYMR 51118 was often used as traction for permanent way trains, without a trailer and attached to Thompson BZ six-wheel brake. The return to base was accomplished with a guard at the rear keeping lookout and with the driver leaning out of the cab window.

For a time the unit remained in BR blue but was soon painted in a version of the LNER tourist livery featuring light green lower panels and cream upper body, a livery carried by both of the line’s DMUs at that time. During this period it also carried the number S11.

In early Summer 1980 the two sets were painted in a darker green and cream livery with small yellow panels and 51118 had its two-character headcode box removed as part of repairs. The units were often used as hauled rolling stock at that time, sometimes as a four-car set and sometimes with Mark 1 coaches added behind.

As more coaches and locomotives became available and the units became more expensive to repair the decision was taken to dispose of them and 51118 and its trailer were moved to the Swanage Railway in March 1985, but were quickly moved on to the West Somerset, arriving there in July 1986.

While at Swanage 51118 and trailer 56097 saw regular use and their livery was modified so that the lower panels were brown and a full yellow end was incorporated. By this time severe corrosion was evident on the bodies, which led to the sister set, which had followed from the NYMR, being cut up for scrap.

By 1991 51118 was still in service and often used in multiple with other heritage units, such as Park Royal and Cravens sets but their increasing unreliability and poor condition led the WSR to take the decision to set them all aside in favour of a fleet of recently-withdrawn Class 115 units. 51118 was repainted in green around this time, but was never lined out, unlike its trailer which received cream lining. A half-yellow warning panel was, however, added.

A period of disuse followed during which 51118 was parked up at Minehead Station exposed to the sea air and steadily deteriorated.

In August 1995 our power car was on the move again, this time for storage at the disused sidings of Richard Johnson, Grain Merchants, of Snetterton, Norfolk where stock for a proposed “National Railcar Museum” was being kept. However nothing came of this project and the vehicle continued to deteriorate with concerns over possible leakage from the sprayed blue asbestos insulation coming to the fore during that time.

Almost three years later, in July 1998, ownership of the set passed to Llangollen Railcars on the strict understanding that the asbestos issue would be dealt with and as a result it was moved to the Midland Railway Centre where a contractor removed all the asbestos lining – a process which left both coaches as a stripped out shell.

51118 remained in storage, mostly at Swanwick, for a further 13 years until, in 2011, some preventative work was done on the bodyshell. At the same time a full rebuild of partner vehicle 56097 was commenced, and it is hoped to move on to this vehicle and to rebuild the body once the trailer body is complete and as and when funding permits. 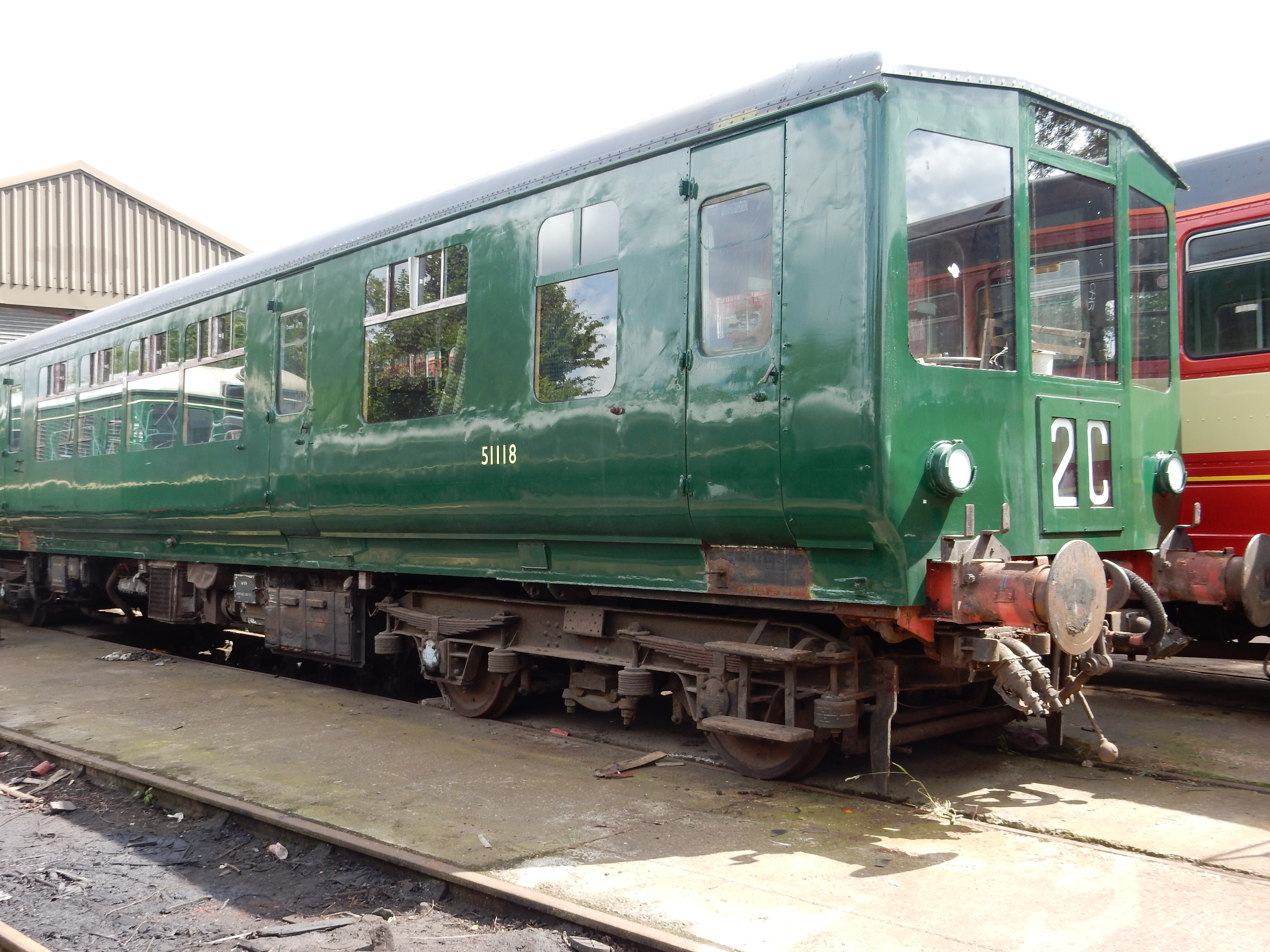 51118 Following work to restore the bodywork. Photo By Evan Green-Hughes 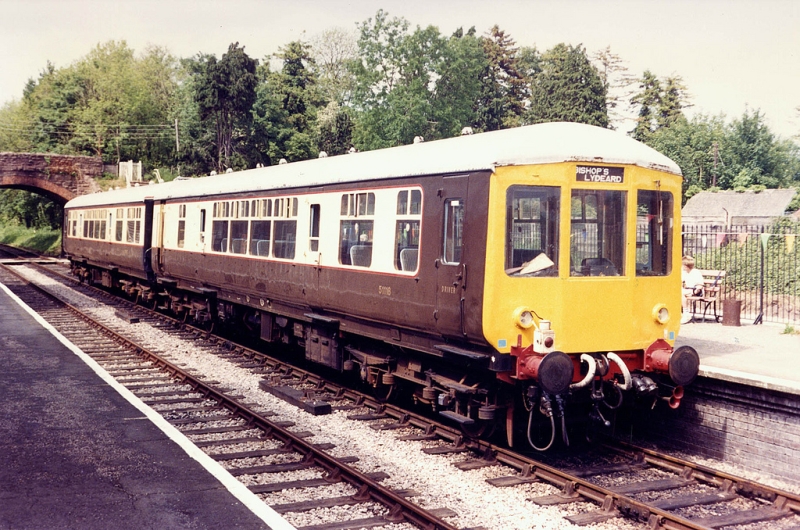 51118 is currently stored at the Midland Railway Butterly work took place to ensure the body was water tight on 51118. Attention has now turned back to partner vehicle 56097 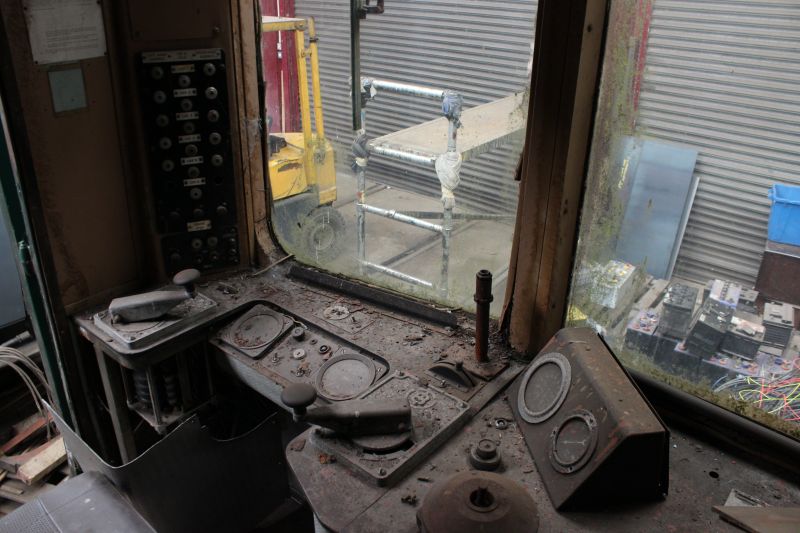 The Air and Axle panel and drivers position, note the older type of panel. Photo By Karl Latham 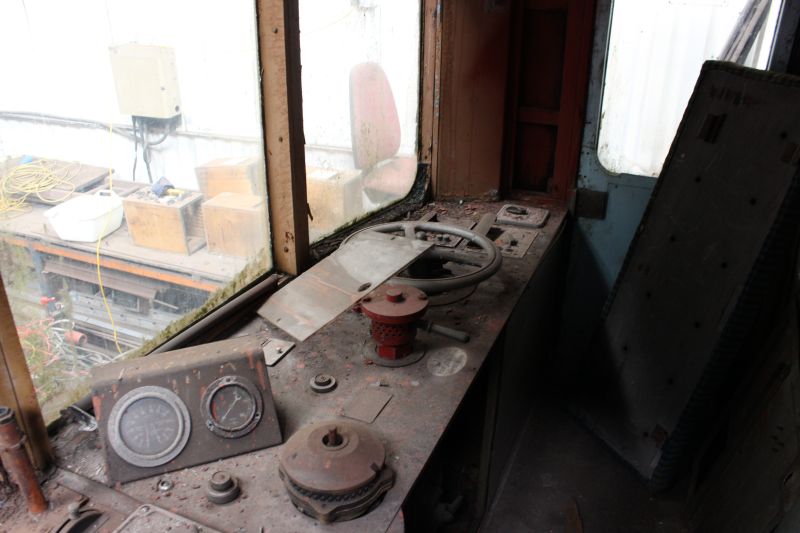 Looking towards the secondmans side. Photo By Karl Latham

Though not yet restored to serviceable condition these photos will show the before of the cab restoration.